@x is a cyborg who was hired by Raddies to get rid of Rai, however, in their first encounter Rai decapitates @x and throws his head down to Earth where he become the øracle to his loyal @xioms.

@x dies when he self-detonates his head in an attempt to kill Rai during their second encounter, but his head is thrown away by Lemur with only a second left.

This character has no powers or special abilities listed. 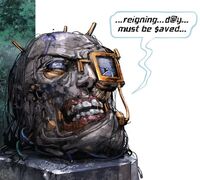 Retrieved from "https://valiant.fandom.com/wiki/@x_(4001_A.D.)_(Valiant_Entertainment)?oldid=55791"
Community content is available under CC-BY-SA unless otherwise noted.