Anchor was a immovable psiot and former member of Unity.

Anchor was a washout from Toyo Harada's special ops team Unity. His power of increasing his own gravitational field was not seen as useful in combat, but Harada hired him as a guard.[1][2] After Harada stole X-O Manowar's armor, Anchor attempted to guard it from Ninjak, but failed.[1]

Over a year later, Anchor was employed by MI-6 on retainer. When the War-Monger, an immortal warrior who fuels human conflict, was starting World War III, MI-6 called Anchor with a plan. Anchor sacrificed himself, using his gravity powers to pin her at the bottom of the ocean forever.[2] 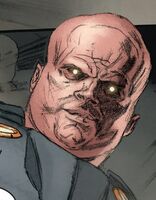 No. This is the only way. If I don't keep her down here, she'll find some way to climb back out. I'm staying with her. We have to be sure.

Retrieved from "https://valiant.fandom.com/wiki/Anchor_(Valiant_Entertainment)?oldid=66679"
Community content is available under CC-BY-SA unless otherwise noted.