Antonius Axia, also known as The Detectioner, is a centurion of the Roman Empire considered the "First Detective." He operates in the service of Emperor Nero solving crimes anywhere he is sent. Antonius was reborn in the sacred fire of Vesta granting him immortality, better senses, and the ability to summon the fire itself. 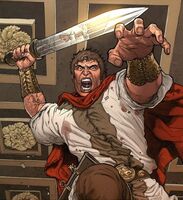 I'm no sorcerer, and my perversions are a private matter.

I'm no devil, but neither do I feel quite human. To mutilate the dead, it's un-Roman. I wish I still believed in the gods, so I could make the prayers of purification. But devils are so much easier to believe in than gods...