Beta-Max is a genius who started out as a member of the E.R.A.. This has made him an antagonist to the superhero duo Quantum and Woody, though he is later reformed and works with MI-6 to save the world. He is considered the Earth's first cyborg, the first human scientist to successfully graft cybernetic parts onto human tissue. Unfortunately, since he made these discoveries in the 1980's, all of his technology is hopelessly obsolete.

In the 1980s, Beta-Max was a genius who pioneered cyborg technology and was the first human to successfully graft cybernetic parts onto human tissue. His work, being revolutionary, earned him an invitation to join Edison's Radical Acquisitions (also known as the E.R.A.), a consortium of the most revolutionary minds in science hell-bent on acquiring mankind's greatest scientific advancements — no matter what the cost! (... Except actual monetary cost...) Into this gang, Beta-Max is introduced and quickly reduced to a second-class member, as he was not quite ruthless enough to be respected by his teammates but was still radical enough to justify his membership in the E.R.A..

Presumably, Beta-Max was once the same stereotypical, scrawny scientist that can still be seen on half of his body. However, his other half is entirely cybernetic. The details of why he used the technique on himself (and to such a great extent) are lampshaded, but he built his cybernetic side "right after [Beta-Max] salvaged [his] first half"[1], which implies that he went through some sort of extreme physical trauma to justify the magnitude of the physical overhaul of a full half of his body.

As the technique Beta-Max used was groundbreaking, so was the hardware he used... at the time. Unexpectedly, he was his own first successful test subject (that we know of), but forty years since his operation (and zero significant updates/upgrades later) have made him an outdated android: he doesn't have rocket boosters, lasers, or any particularly useful "go-go gadgets". That aside, he can send a mean fax![2] Unfortunately, any modern-day upgrades would probably be lethal, which has reduced Beta-Max to a simple background gag.

During his time with the E.R.A., Beta-Max came to be recognized as a harmless villain, not equipped with any overtly-evil hardware or sociopathic tendencies. He seems to be a genuinely nice guy, more of an evil-is-a-daily-chore villain than an I-have-an-evil-plan guy. It is later revealed that Beta-Max only joined the E.R.A. and became a vengeful scientist to help people.[3] So, when the E.R.A.'s main lab was raided by the police, Beta-Max opted to go his own way.

A few months later, during the Dead Drop Crisis, Beta-Max was recruited by high-ranking MI-6 officer Neville Alcott to help determine what the security around a terrorist dead drop site was like. After using his x-ray vision to scan the site and determined that there were no booby-traps protecting it, Beta-Max was promptly kidnaped by Neville, who reveals himself to actually be an alien impersonator. However, facing death, Beta-Max manages to send a distress call (or, rather, a distress fax) to the offices of the real Neville Alcott to warn him of the situation.

By the time backup arrives, his decapitated head has been left on the side of the road and — in the events leading up to the purge of the Dead Drop virus — Beta-Max's remains go missing.

Days later, Beta-Max is rebooted and, when he goes back online, he opens his eyes to see Jon and Reiko (two white hat hackers involved in the Dead Drop event), who reveal that he has received an upgrade while he was offline.

Beta-Max is a harmless villain as he isn't very sociopathic, but he transitions to being an outright hero. He is naïve, but very lovable and he loves to help people.

See Powers and Abilities. (Beta-Max has all of his equipment integrated into himself.) 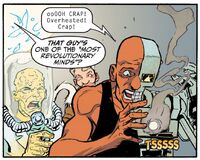 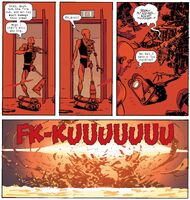 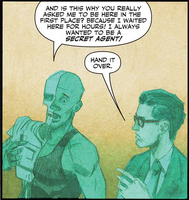 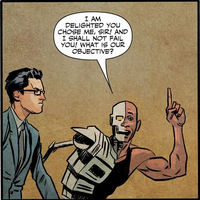 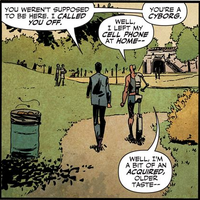 That's the problem with being a super-secret organization--no one ever gets to see the film!

I always wanted to be a secret agent!

Well, I'm really thankful for the opportunity! Helping people is why I became a vengeful scientist, but then I realized I was wrong! And here I am now, helping us reach greatness in a much better way!

I am not sure if this finds you in time but in case of my untimely death I hope to die doing something worthwhile.... Sir if I don't make it at least I hope you can save the others I always wanted to be a secret agent, you know?

Turns out dropping dead ain't all that bad. Sometimes it might be just what's needed.

Whoa. Is that a Polaroid camera in my chest?

Retrieved from "https://valiant.fandom.com/wiki/Beta-Max_(Valiant_Entertainment)?oldid=60683"
Community content is available under CC-BY-SA unless otherwise noted.