Bloodshot is a living weapon created by the secret government organization Project Rising Spirit. His blood contains nanites that give him a variety of special powers. The process that turned him into Bloodshot also wiped his memories, leaving him unsure of his previous identity.

A cold and ruthless Mafia hitman who seemed less than human, Angelo Mortalli's rise within the Mob ended when Gino Canelli discovered he had been unfaithful to his daughter. Framed for the brutal slaying of Johnny Scotto, a rival mobster, and convicted of first–degree murder, Mortalli cuts a deal with the FBI to give evidence against the Mob to stay out of prison, but when Canelli gets wind of this, he snatches Mortalli from witness protection and bundles him off as a “volunteer” for Project Rising Spirit.

One of the few subjects to survive the Bloodshot Procedure, Mortalli has his mind wiped of all memories and is systematically programmed with information about strategy, tactics, and warfare. However, before the full programming is completed, Geoff McHenry breaks into the facility and releases Angelo, who kills his captors and escapes. Confused, lost, and suffering from amnesia, Angelo seeks clues to his origin.

Discovering that the nanites in his blood gives him incredible powers, including great strength, faster reflexes, and heightened senses, Angelo rechristens himself Bloodshot after the process that granted him his abilities. Besides having a body that operates at peak efficiency Bloodshot possesses a rapport with machinery that allows him to seize control of and dominate any electronic device in his vicinity. His innate Harbinger ability helps Angelo survive the Bloodshot Procedure that killed so many before him.

Shorn of the details of his former life and loyal to no one but himself, Bloodshot reinvents himself as a force for good, and being a hero gets into his blood… literally!

Bloodshot’s Harbinger ability allows him to manipulate machines via an apparent telekinetic power enhanced by his nanite-laced blood. Bloodshot seems to be able to control electronic devices within a ten to thirty foot radius of his body. This ability works best when applied to computer-based electronics, as there is a natural affinity with his nanites.

Less fortunate subjects of the experiment (those without a psiotic ability to help them survive and thrive after the nanite injections) rarely lived long, and were cruelly nicknamed "Speedshots". 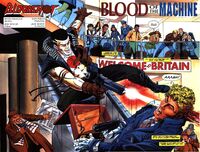 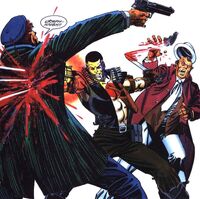 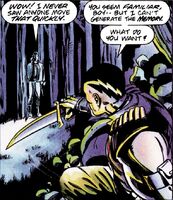 I can feel my body preparing. Like an animal psyching up for the kill. And it scares me 'cause -- I like it.

Retrieved from "https://valiant.fandom.com/wiki/Bloodshot_(Valiant_Comics)?oldid=68420"
Community content is available under CC-BY-SA unless otherwise noted.