Bloodshot is a superhero film starring Vin Diesel as the titular hero Bloodshot, a soldier who is brought back from the edge of death and turned into a cybernetic super-soldier, without his memories. He must find out who he is, and use his newfound abilities to solve a dark conspiracy.

It is the first major motion picture based on the Valiant Universe, and the second official live-action adaptation of Bloodshot, after the Ninjak Vs. The Valiant Universe webseries. It was produced by Sony Pictures and theatrically released in the United States on March 13, 2020.

Based on the bestselling comic book, Vin Diesel stars as Ray Garrison, a soldier recently killed in action and brought back to life as the superhero Bloodshot by the RST corporation. With an army of nanotechnology in his veins, he’s an unstoppable force –stronger than ever and able to heal instantly. But in controlling his body, the company has sway over his mind and memories, too. Now, Ray doesn’t know what’s real and what’s not – but he’s on a mission to find out.[2]

No plot summary has been written yet.

Comparison to the Comics

Being a hero...is in his blood.

Tell me. Do you remember anything?

What you think is real...sometimes ain't! 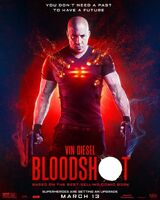 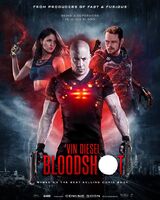 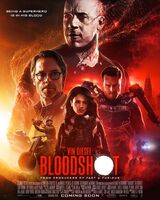 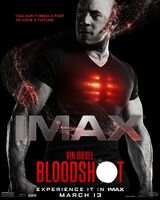 Coming Soon
Add a photo to this gallery

The logo of Rising Spirit Technologies (RST) were created by designer Tom Muller. [6] 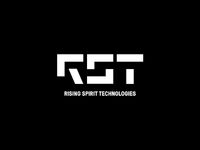 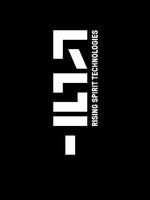 A very special variant cover featuring Vin Diesel's look as Bloodshot was created for Bloodshot Salvation #12; limited to one copy only and illustrated by Lewis LaRosa (Diesel's favorite Valiant artist), and signed by Diesel. The pose was inspired by Diesel's favorite Bloodshot pose, from Cary Nord's cover for Bloodshot Reborn #1. The issue was sold as part of a charity gaming auction called "Game4Paul", and was technically the first look at Diesel as Bloodshot.[7] This art later served as the inspiration for the film's first poster.

Textless Cover
Add a photo to this gallery

BLOODSHOT – International Trailer 2
Add a photo to this gallery