For many years, Bloodshot has waged a one-man war against his enemies across the globe...but not anymore. On Bloodshot Island, Ray Garrison discovers that he is far from Project Rising Spirit’s first experimental soldier. Several generations of augmented commandos – including the smartest dog around – have come before him, dating all the way back to World War II. Together they fight P.R.S.' newest weapon, Deathmate, and eventually find a way to escape from the prison island.

Bloodhound was the first test subject in the program that proceeded the Bloodshots, during World War I. Tank Man first served in World War II, Viet Man in the Vietnam War, Cold Man during the Cold War and possibly the Afghan-Soviet War, Quiet Man in the Gulf War, and the Every Man in the most recent War in Afghanistan as well as in Special Ops.

Every Man,
aka Bloodshot 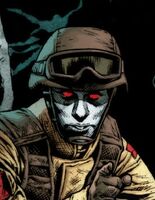 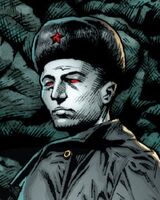 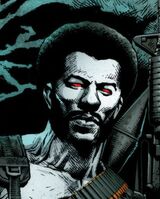 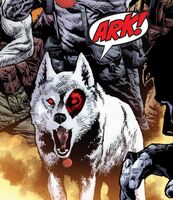 Bloodhound
Add a photo to this gallery

Retrieved from "https://valiant.fandom.com/wiki/Bloodshot_Squad_(Valiant_Entertainment)?oldid=72050"
Community content is available under CC-BY-SA unless otherwise noted.