The Cartographer
The Mapmaker

David Camp is a former rock climber and the leader of the Divine Army, a cult following of Divinity, and the writer of the Gospel of Divinity. David later turns against Divinity and starts calling himself the Cartographer.

When Divinity comes back from The Unknown and crash lands with his space capsule in the Australian Outback the first man he meets is David Camp. Unfortunately David is just climbing a mountain and, being surprised to see a guy in a space suit, he slips, falls, and bangs his head. He starts wandering around in the desert, being hurt and dehydrated he begins to hallucinate. Eventually he arrives in an oasis with fresh water. It looks like the Garden of Eden and David accepts his fate, believing that he's in heaven, and collapses. A group of Aborigines finds David and leads him to a plateau where Divinity has just crash landed and welcomes him. David knows Divinity has saved his life.

The Gospel of David Camp

Known excerpts from the Gospel:

After being saved by Divinity, Camp has developed an obsessive devotion to him. He sees Divinity as a savior, but the pseudo-religion he developed around Divinity extends further than the man himself. Camp sees the process of how Divinity became a god as the first of many, and he hopes to kickstart more, whatever the cost.

After returning from The Unknown, it is implied David obtained some if not all of the abilities of others who had done the same, like Divinity or Myshka. The exact nature of these abilities is unknown. It is later revealed that he was unknowingly granted with the ability to read energy when Divinity first touched him.[1] 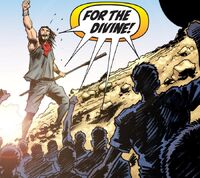 Who are you to decide my ultimate purpose?!

The David Camp that once lived has died and been reborn. You may call me the Cartographer. I was touched once by the divine. How many of you can say that you truly saw the face of a god? Divinity reached out and pulled me off the cliff face of obscurity. Bring me the book. At first it seemed happenstance, but his touch opened my eyes. I began to see patterns. I began to see a purpose in everything. I saw the universe...time and space...as an immense map to be navigated. Time is not absolute. Space is not finite. Reality is not singular.

We preach peace here. I simply wish to instill the highest form of tolerance. With tolerance comes acceptance. And with acceptance comes ultimate knowledge. Isn't that right, my love?

Everything. Everyone. Serves a purpose. And every purpose...serves me.

Retrieved from "https://valiant.fandom.com/wiki/David_Camp_(Valiant_Entertainment)?oldid=62213"
Community content is available under CC-BY-SA unless otherwise noted.