David Dunlow is a Geomancer, a powerful mystic with the ability to communicate directly with the Earth. Or rather, he was supposed to be. Time travel stole the role from him, and he was later manipulated by the evil Master Darque .

After the death of the previous Geomancer Kay McHenry, young David David Dunlow should have inherited the full power of the Earth, and did indeed gain some of it. The process, however, was interrupted by the coming of Tama, a young girl from the future and the Geomancer of her era. With the Geomancer's guardian the Eternal Warrior focusing his efforts on Tama, the evil Master Darque was able to kidnap and manipulate David in an attempt to gain his power. After Darque was defeated, David gave all his power to Tama, so the Geomancer's power could be reunited once more and he could live a normal life.

David is a young, scared boy who has no desire to get involved in a world of destinies and mad necromancers. He willingly gave up his powers as soon as he could, just to avoid ever having to go through those horrors ever again. 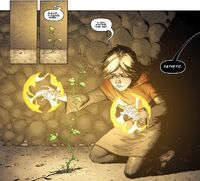 I told you, David. You are the rightful Geomancer. All the power of the Earth is ours...but not until you stop this girl--this usurper--from interfering with us. Destroy her, and I'll show you your mother.

David. Oh, David. You are spectacular. I've hurt a great many things, David. But I won't hurt you. Not yet. You have been chosen to be the new Geomancer. The speaker for all the elements of Earth. Together, we have much work to do.

Retrieved from "https://valiant.fandom.com/wiki/David_Dunlow_(Valiant_Entertainment)?oldid=63350"
Community content is available under CC-BY-SA unless otherwise noted.