David Lloyd George (1863-1945) was the last liberal Prime Minister of the United Kingdom during and after World War I.

In Valiant Entertainment, he and Woodrow Wilson were in charge of deploying Unit Y, an early Unity team.

This character has no powers or special abilities listed. 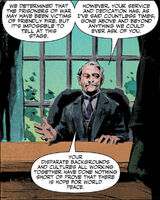 This article has no notable quotes listed.

Retrieved from "https://valiant.fandom.com/wiki/David_Lloyd_George?oldid=67435"
Community content is available under CC-BY-SA unless otherwise noted.