Derek Henderson is the father and accidental creator of the superhero duo Quantum and Woody. His biological son Eric is Quantum and his foster son Woody is... well, Woody. He died when the E.R.A. targeted him to steal his scientific discoveries.

Unknown to Derek at the time of his death, his brain patterns were preserved years earlier in the super-powered animal known as "Vincent Van Goat." The Goat contains a much younger version of Derek's mind, but this allows him to live on and assist his sons in crime-fighting. Eventually, the goat's body flushed both the quantum energy and Derek's consciousness out of it's body, giving Derek a short amount of life before his new energy form dissipated. 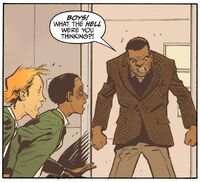 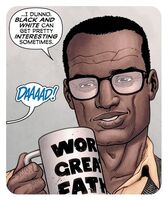 This article has no notable quotes listed.

Retrieved from "https://valiant.fandom.com/wiki/Derek_Henderson_(Valiant_Entertainment)?oldid=68242"
Community content is available under CC-BY-SA unless otherwise noted.