Abram Adams is Divinity, an incredibly powerful superhero in the Valiant Universe. He was a Russian cosmonaut who embarked on a 30-year mission of space exploration. When he returned, he had gained god-like powers, and control over space and time.

Abram began his life by being dropped off on someone's doorstep in a basket as a baby. After years as a ward of the state, Abram joined the Soviet Union's army, and during the height of the Cold War the army asked him to take on a dangerous 30 year mission deep in space. They thought he was perfect because he had no family ties, but secretly, he had a wife/girlfriend. Abram accepted and began to train extensively until he was ready. The night before he was sent into space, he told his wife he would have to leave for years. That night, his wife also confessed to him that she was pregnant.

His journey into space began in 1960. During the journey he and his comrades went into a cryogenic state from time to time until they found something amazing, a place only known as The Unknown. Abram couldn't breathe so he took off his helmet, and miraculously, he could still breathe. Then something changed him and gave him the powers of a god although it felt to him as it was the moment he died. This is also the moment he decided to return home. After 55 years, Abram eventually returned to Earth landing in the Australian outback in 2015.

Once Abram got back to Earth, he began granting nearby peoples wishes, even soldiers sent to take him down. Eventually he amassed too much of a crowd, with travelers coming to him seeking advice, and the team Unity, consisting of Ninjak, Eternal Warrior, X-O Manowar, and Livewire was sent to capture him or terminate him if necessary. When they got there, Divinity made seconds turn into months for the heroes. But Ninjak had training and knew this wasn't real. So he went to help the other heroes and eventually they got back to the real world. The battle began but Divinity already had followers, worshipers, led by David Camp, a man Divinity had helped earlier. The followers started to attack the heroes but Livewire put a prison pod around Divinity as the other heroes attacked him while he was distracted by images of his dead wife/girlfriend and daughter. Eva, the wife, didn't want to be back to life and she had died peacefully in sleep while his daughter, Anya died of cancer. Eventually the heroes had sealed up Divinity and were extracted by the giant robot GIN-GR. Afterwards, Unity had conversation with Neville, their organizer, saying they didn't understand what Divinity did wrong. Unity put the prison pod miles below the Earth's surface. Now Abram looks back at his life and gets to know his daughter more by talking to her when he can using his time manipulation.

Divinity, after gaining his god-like powers, has become very aware of the impact he has and could have on the world. While he wants to do good, and is willing to stop other beings of his power level from interfering with the world, he will not interfere with smaller-scale conflicts. This is most prevalent during the second Harbinger Wars, where he refused to aid Livewire and end the oppression of psiots, as it would allow humanity to move on without learning lessons about the consequences of their actions.

Due to his god-like nature, Divinity has no real need for equipment or gear. However, he almost always wears the same astronaut suit he wore on his initial trip to the Unknown (or a simulacrum of it).

Divinity #0
Add a photo to this gallery 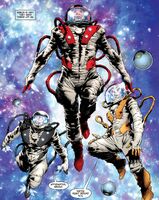 David Camp, meet Abram Adams. The man I used to be.

This kind of power can't be left in one man's hands. Regardless of his intentions.

Abram Adams was an astronaut. An explorer. A husband and a father. Once I was all of these. But now... now I flip through the life of Abram Adams like the worn pages of a dog-eared novel. Wondering at the meaning. And savoring the best parts.

Let's be honest, Abram. You're a god. You can fix all of this with a snap of your fingers. Protect the psiots and end this war before it starts. Save lives. What better use of your abilities? What else are we here on Earth for if it's not to make it a better place? A safer place. You can make it right.

I could do what you say. But, then what? What does humanity learn? They learn to come to me to solve their problems. I am not a god... nor do I wish to become one.

Retrieved from "https://valiant.fandom.com/wiki/Divinity_(Valiant_Entertainment)?oldid=67024"
Community content is available under CC-BY-SA unless otherwise noted.