Dr. Shan Fong is a former TV personality and paranormal investigator and scientist. She is better known under the alias Doctor Mirage which she inherited from her deceased husband Li Hwen Mirage whose ghost (spirit) is always with her - they can communicate and see but not touch each other.

Shan Fong, born with the natural ability to see and communicate with spirits of the dead, trained as a parapsychologist and paranormal expert. It was in these studies that she met her future husband, Li Hwen Mirage. Together they became renown paranormal investigators, banishing spirits and stopping monster attacks. The pair even turned their work into a succeful reality television show. That is, until Hwen died. Shan tried to reach out to him, but found she could not sense his spirit. She considered ending her own life to be with him, but she feared she would not be able to locate him on the other side. [1]

Shan sank into depression, abandoning her TV show and isolating herself. She continued to do paranormal work, aiding the LAPD on murder investigations, and relaying messages to the living from those beyond, but never with the same vigor as before. Her agent, who still worked with Mirage despite her leaving television, put her in contact with an eccentric billionaire by the name of Linton March. March's story of needing a magical binding removed didn't sit right with Mirage--March was much older than he looked, and played dumb about the occult despite clearly being an expert--but she took the job, for two reasons. She needed the money he offered to save her house, and a strange, otherworldly creature kept chained in March's basement told her where to find her husband's spirit.[2]

Projecting her soul into the afterlife, Mirage found the walls between our world and the one beyond crumbling. It was the work of March, and occultists like him, who stole power and artifacts from the Deadside without concerning themselves with the strength of the walls. Mirage even discovered that a demon lord named Ivros planned on using the crumbling walls to invade the living world.[3] Meanwhile, in the land of the living, March's old occultist associates grilled him for information on Mirage. They feared March wanted to use her to cut them out of the pact that granted them their power. Discovering the location of Mirage's body, they kidnapped it, and prepared a ritual to kill her to cement their power permanently.[4]

Mirage traveled to the location of Hwen given to her by March's prisoner, and found a mysterious and powerful ocean deity named the Pale Mistress, who had imprisoned Hwen's spirit.[4] In return for freeing him, she demanded a powerful staff, that could potentially heal the broken boundaries of the Deadside. The pair had to obtain the staff and return immediately, if they left or betrayed the Pale Mistress, she would destroy Hwen's spirit. Reunited with her once lost husband, Mirage brought him up to speed on what had happened, and then the Mirages journeyed to obtain the staff. Once retrieving it, Shan's astral form became wracked with pain. The occultists were beginning their ritual on Hwen's body. The Mirages were faced with a dilemma--if they went to save Shan's body, their pact with the Pale Mistress would be broken, and Hwen would die. But if they didn't confront the occultists, their ritual would be complete, Shan would die, the walls between life and death would break completely, and Ivros's armies would invade the land of the living.[1]

Realizing what they had to do, the newly-reunited Mirages split up once more. Shan attacked the demon army, holding them off long enough for Shan to return to her body. Shan interrupted the ritual, slew the occultists, and freed their mystical prisoner. She spared March, but the occultist was now forever tied to the ghost of the occultists he attempted to betray. The former prisoner guided the Mirages, one on each side of the veil of death, in repairing the boundaries between worlds. He then repaid his debt to Shan by giving her a gift: Hwen's spirit, returned to life as a ghost.[5] 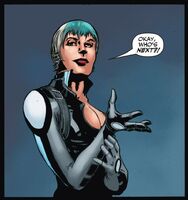 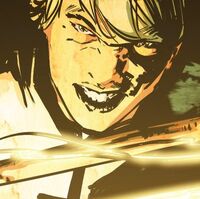 If you want to get technical, I'm a paranormal investigator. That's a little like a private investigator except I deal with psychic phenomena, the supernatural and, frankly, a lot of crazy people who should probably get out more.

People think of ghosts as something to be scared of. But most of the time, they're here to help. As for the rare occasions when they aren't, well...that's what I'm here for.

Retrieved from "https://valiant.fandom.com/wiki/Doctor_Mirage_(Valiant_Entertainment)?oldid=71753"
Community content is available under CC-BY-SA unless otherwise noted.