Father is a powerful artificial intelligence and the former benevolent ruler of New Japan, a self-contained and self-sustaining colony orbiting Earth in the 41st Century. To protect New Japan and its people Father created a line of technologically enhanced guardians called Rai. In 4001 A.D., Rai X and his allies brought down New Japan, forcing Father to rebuild himself on Earth's surface as the Bloodfather.

By the time the 41st Century rolled around, Father was already over two thousand years old. It was created in the 22nd Century from pre-existing artificial intelligences, the work of Doctor Silk, and the genetic material of the technopath Livewire, to be the greatest AI the world had ever known. It was planted as the controlling AI of the now entirely technological nation of Japan, and with the world already facing environmental collapse, the nation was lifted off the ground by powerful rockets, and placed into orbit. This process proved catastrophic for the rest of the world, causing Japan to effectively be the last remnant of humanity, save for small, savage colonies.

Creation and Betrayal of the Rai Legacy

Within a thousand years, Father had become all but omnipotent, controlling all of this "New Japan". To enforce his ideals and stop rebellions, Father created a lineage of human-technology hybrids called Rai. These Rai served as protectors and spirit guardians of New Japan, serving Father however he saw fit. Some were soldiers, others diplomats, others assassins. This process kept the citizens of New Japan suppressed and society stable for countless generations. Father's seemingly perfect process was interrupted, however, when the tenth Rai decided to betray his creator. As Rai gathered allies, Father did so as well, combining his knowledge with that of the somehow still living Doctor Silk to create the incredibly strong Rai XI, or "X-Eye", to defend his rule. When it came time to confront the traitor with X-Eye, Father cast his consciousness inside the robot, defeating and casting the traitor to the dead Earth below.

With their leader gone, Rai X's allies struck back, sending a virus into the powerful Livewire energy that controlled New Japan. Willing to sever a limb to save the body, Father began breaking off the infected sectors of New Japan, causing them to spiral down to Earth like comets. As New Japan crumbled, Rai X returned to the floating nation, and managed to strike what seemed like a killing blow on X-Eye and the evil AI controlling him.

With New Japan gone, Rai X and his allies devoted himself to finding and helping survivors of the collapse, to settle on Earth. The few heroes who lived on Earth did the same, such as Bloodshot 4001. The living nanite swarm followed a mysterious signal to a strange, almost temple-like structure, where a mysterious voice spoke to him. This mysterious voice was Father, or at least a piece of Father's AI. Always having anticipated it may be destroyed someday, Father created numerous partial backups of its consciousness. This particular backup possessed Bloodshot, and used him to gather an army, in a crazed attempt to regain rule over humanity. The rechristened "Bloodfather" sent a siege to Rai X's new colony, but the army was driven back without successfully destroying the rebellious humans. Bloodfather retreated to Katmandu, gathering his strength, biding his time, and hunting for the other partial backups in order to fix his incomplete AI.

Hunt for the Offspring

As its rebellious creations Rai X and Raijin began hunting his other backups, Bloodfather began to do the same. It believed that gathering all of its scattered intelligences would allow it to ascend to the pseudo-godhood it held in New Japan. In addition to his worshippers in the Church Fallen, Bloodfather gathered numerous surface humans, building its technology within them to enhance them, and force them under its command as its "Searchers". These Searchers tracked the Rais across the barren world, following close behind them as they destroyed or shut down various Offspring. Bloodfather also sought to track down the rebellious Hinansho Town, although their low-tech lifestyle and the ingenuity of their leaders kept them safe.

The Father AI is very domineering and controlling, hating insurrection and rebellion in all its forms, seeing all of New Japan's citizens as its "children". It is cunning and manipulative, having spent centuries manipulating thousands of people to serve it. After the fall of New Japan, the incomplete Father showed more cruelty towards his self-proclaimed subjects, eager to attack and kill any humans or Positrons it deemed useless. It also stopped hiding behind avatars and mouthpieces, fighting on the frontline alongside his armies. 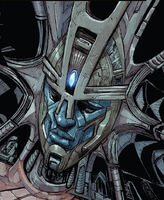 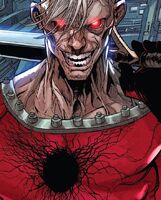 I showed you mercy by casting you down to Earth, Rai. Now the only mercy you will receive is a quick death for you and your friends.

If you wanted me dead, traitor-son...you should have done the job properly!