Their purpose is to hunt down and neutralize rogue psiots. Recruits are given a neural implant that gives them access to a variety of psiot powers, in addition to shortening their lifespans. They are considered highly expendable and Rising Spirit/Omen has the ability to detonate any member's neural implants at any time.

The Harbinger Active Resistance Division Corps initially worked for Project Rising Spirit in the 1990s, before being shut down. When a conflict between Toyo Harada's Harbinger Foundation, the Harbinger Renegades, and a group of rogue psiot children exploded in Las Vegas, the Project brought together the old members of the Corps once more in an attempt to end the violence. Even Major Palmer's careful leadership couldn't stop the problem from escalating however, and two members of the team died when the Lifeline Station lost power, deactivating their Implants.

Despite their failure at containing the Harbinger Wars, PRS decided the H.A.R.D. Corps needed total reinstatement. Gathering a team of nobodies and wannabes under Major Palmer's leadership, the Corps was sent to infiltrate the Harbinger Foundation in order to steal their new weapon: nanite-enhanced super soldier Bloodshot, recently captured by Harada. While freeing the cybernetic soldier, the Corps was detected by Harada, and the Foundation's compound devolved into chaos. Despite several members dying in the process, the Corps managed to escape and regroup. PRS leader Morris Kozol insisted the group obtain the nanites Harada stole from Bloodshot, and the team was sent back in. Now aided by Bloodshot, the Corps managed to steal the nanites back, with team member Superstar sacrificing himself to damage Harada's more valuable tech. Bloodshot stayed with the group, in exchange for life-saving experiments on his nanites, helping them on missions against threats like The Specialists.

Discovering the existence of a powerful, globe-manipulating secret society called The Sect (with which they were loosely affiliated), PRS decided they needed to stop the organization. Sending the Corps and Bloodshot to the base of the Sect's new leader Archer, the main Corps was sent to remove his immortal bodyguard Armstrong from the equation. Getting Armstrong drunk, only to find he actually fights better drunk leading to his escape, the Corps regrouped with Bloodshot, who had managed to capture the young leader of the Sect. Taking Archer into their custody, PRS came under siege from both inside and out when Armstrong attacked the base in an attempt to save his young friend, and Archer used his combat mastery to take down his captors and accidentally mortally wound Disciple. A cease-fire was agreed on when Archer tried to operate on Disciple, with PRS agreeing to stay out of Archer and Armstrong's affairs if Archer would cut all of PRS and the Corps' loose ties to the Sect.

Unbeknownst to his allies or superiors, Bloodshot managed to free himself from needing PRS' experiments to stay alive. Kozol discovered this, and, desperate to keep his weapon on a leash, set Bloodshot up for the murder of Corps agent Genius, and sent the Corps to enact revenge. Flatline, Genius's former lover, managed to take the supersoldier down, but not without immense damage to herself. Bloodshot, however, revealed the truth of what was happening to her. Even injured, Flatline managed to aid Bloodshot's escape from Kozol's grasp. Despite losing their greatest weapon, the Corps stayed active, going on another recruitment drive.

Several years after their last confrontation with Toyo Harada, the psiot businessman fancied himself a world savior. He conquered part of Somalia, and gathered a number of powerful, non-psiot superhumans to be his elite fighting force. This force included Borz Umarov, codename Gravedog, a former member of H.A.R.D. Corps member who'd sided with Harada and yet could somehow still use his implant. Joining up with a technopath named Livewire, the team investigated the satellite that transmits the powers directly, looking for signs of hacking. The team was ambushed by a "psiot bomb", and then by Harada himself, but managed to regroup. Deciding to take the fight directly to Harada, the Corps attacked a convoy carrying advanced technology into Harada's conquered territory, but became trapped in a web of decoy and illusory ships. Harada's striketeam came down on them, with Gravedog personally attacking Major Palmer, feeling that he needed to kill his former superior out of a misguided sense of "respect". While the team at large failed to beat back their powerful foes, Palmer knocked Gravedog into the ocean, and knocked a hole in the ship in an attempt to sink it. The Corps was forced to retreat as Harada arrived to back up his squad, realizing their mission had failed.

Massacre in the Free City of Rook

The same group of psiot anarchists who attacked Las Vegas years prior, now going by "Generation Zero", conquered the city of Rook as their own "Free City". This, plus their history of violent actions, including killing a dozen H.A.R.D. Corps members, led the Corps to seek retribution. Their plan immediately failed, however, when Generation member Animalia attacked the Corps' plane with a massive construct, causing it to crash into the city and killing Vagabond in the process. The chaos ]escalated as the Corps' psiot-dampening bomb went off prematurely, forcing the Generation to scatter. Both sides lost countless lives, as the fight spread into the city. The fight began leaning in the Corps favor when the informal leader of the Generation, Cronus, was shot in the head, and slain on the battlefield. Soon, all resistance was eliminated, and the Generation all but destroyed.

Despite the questionable success of their operation in Rook, the Corps continued their war on rogue psiot factions. An attempt to track down the mysterious Alexander Solomon, however, failed, and soon their actions gathered the attention of the psiot-advocates known as the Renegades, and their immensely powerful leader Peter Stanchek. The confrontations between the groups continued to escalate to dangerous levels, while the Corps continued their hunt for Solomon. Solomon, two steps ahead, tricked the Corps into unleashing a long-imprisoned Psiot monster known as The Alpha. The monster ripped through the Corps, killing several agents and mind controlling several more, forcing the Corps to retreat while the monster went into hiding.

Despite the setbacks and large number of KIA members caused by the attack on Rook and the Alpha, the Corps continued their escalating attempts at controlling psiots. This all came to a head when they attacked a group of young, relatively weak psiots under the protection of powerful technopath Livewire. While the Corps failed, Livewire was enraged by the attempt, and the US government's increasingly aggressive attempts at controlling psiots as a whole, causing her to act drastically, shutting down the entire United States power grid. Unsurprisingly this just caused conflicts to spike, hard, with the Corps being sent out to take care of Livewire and her allies in the Renegades. Major Palmer worked with superheroes Ninjak and X-O Manowar to try and take care of Stanchek, while the rest of the Corps were sent after the rest of the Renegades. The two sides converged in an Ohio city, and even as Ninjak turned on them, the Corps continued attempting to kill the Renegades and the psiots under their care. The Renegaes eventually stopped them, and Livewire saw the recklessness of her actions and restored the nation's power, and a thin sense of peace was formed. Livewire was declared an enemy of the state, with the Corps being planned to be sent in after her if she ever surfaced.

For a complete list see the H.A.R.D. Corps members category.

Samuel, Tucker, and Camarillo were among the very first candidates and prototypes for Project Rising Spirit's early experiments with neural implants led by Dr. Arthur Kendall during the 1970s; see Bloodshot and H.A.R.D. Corps: H.A.R.D. Corps #0. 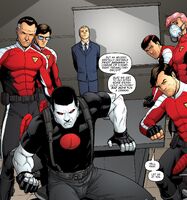 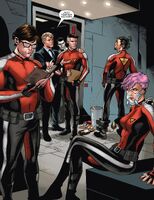 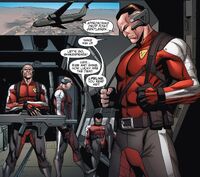 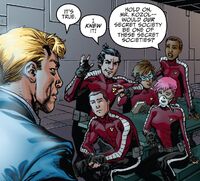 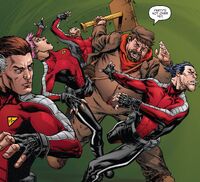 Retrieved from "https://valiant.fandom.com/wiki/H.A.R.D._Corps_(Valiant_Entertainment)?oldid=67701"
Community content is available under CC-BY-SA unless otherwise noted.