The Immortal Enemy is a monster determined to kill the Geomancer of every generation. It is seemingly impossible to kill, has the ability to shape-shift, and can trigger visions of anyone's darkest fears. This has made it the arch-nemesis of the superhero known as Eternal Warrior, whose mission is to protect the Geomancers.

No one knows who the Immortal Enemy truly is, or where he comes from. It claims to be a literal force of nature, representing entropy and death, but this obviously can't be proven. What is known is that the Enemy is a dark reflection of Gilad, the Eternal Warrior. Gilad is the guardian of the Geomancers, individuals empowered with the gifts of the Earth, who safeguard and heal it. Every few generations, the Enemy rises, and attempts to kill the Geomancer of that generation. He succeeds every time, and as the Earth is plunged into a dark age, the Enemy disappears in waiting once more.

In the modern day, the Enemy returned to kill the Geomancer Kay McHenry. Gilad, however, knew from experience he could not save Kay alone, so he gathered the greatest heroes of the era—Bloodshot, Ninjak, the Renegades, and countless others. While the heroes confronted the Enemy, Gilad went on a quest to help MI-6 unlock the mysterious "Enigma Box", which he believed may hold the key to stopping the Enemy forever. As the super-soldier Bloodshot took Kay and ran, the brave army of heroes attempted to stop the Immortal Enemy, and succeeded in slowing him down...

But not for long. The Enemy trapped the heroes in their own nightmares, and tracked down Kay and her protector. He attempted to access Bloodshot's memories, and found he found that the memoryless Bloodshot had no deep-seated fears, giving him the perfect edge to fight the Immortal Enemy one-on-one.

Finally cracking the Enigma Box, Gilad was greeted with a strange sight—another Geomancer! Sent back in time from a dark, apocalyptic future by the Gilad of that time, the young girl named Tama had knowledge of an upcoming disaster.

Unfortunately, the combined might of Gilad, Bloodshot, and the two Geomancers was not enough. The Immortal Enemy slew Kay McHenry, in the arms of her new protector, and proceeded to disappear. It has yet to be seen if the coming of Tama truly will stop his potential return, but if the greatest heroes of our time could not stop him, the world should hope and pray its Immortal Enemy is gone forever.

While the Immortal Enemy has no gear he uses consistently, different forms he takes to antagonize Geomancers have gear, such as Mister Flay's cane. 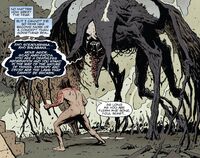 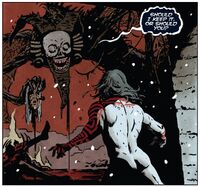 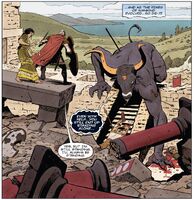 The Immortal Enemy as Mister Flay 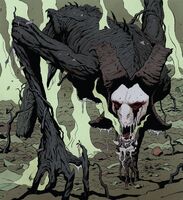 I am the primal urge. There is no reason. No rhyme. Like a viral outbreak, the grinding of tectonic plates, or a great flood, it just happens. It just is. The Immortal Enemy simply...is.

Retrieved from "https://valiant.fandom.com/wiki/Immortal_Enemy_(Valiant_Entertainment)?oldid=69435"
Community content is available under CC-BY-SA unless otherwise noted.