The Null
The Sect

The Last Enemy is an immortal assassin who serves the Null, dedicated to creating chaos and wiping out all existence. This has made him an enemy to Archer & Armstrong, Eternal Warrior, and the Geomancer. 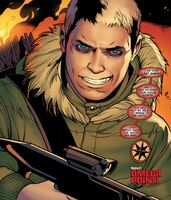 The Null subtracts reality in two ways: first gradually. Then instantly. I handle the "gradually" part. I was born during the crusades -- they used me to terrorize the Levant, transforming seemingly normal people into cold-blooded killers. From time to time, when the Null wants history nudged in a certain way, I take out... specific targets. Dallas, Sarajevo, Memphis... Ford's Theatre? I go where I'm asked. Wherever there is a seemingly senseless explosion of violence... I am there. For I am nothingness. Projected outward.

Retrieved from "https://valiant.fandom.com/wiki/Last_Enemy_(Valiant_Entertainment)?oldid=63525"
Community content is available under CC-BY-SA unless otherwise noted.