Livewire is Amanda McKee, a powerful Psiot with the ability to control machines. She is a member of the Harbinger Foundation loyal to Toyo Harada, but has also worked against Harada when she believes his power needs to be checked. She has also been a member of the superhero team Unity.

She is a psionic technopath, able to control computers, and micro-circuitry with her mind.

Amanda McKee was orphaned at a young age. Taken in by the billionaire visionary and founder of the Harbinger Foundation, Toyo Harada, Amanda grew up devoted to Harada and his mission assuming. Assuming the name Livewire, she rose to the highest level of the Foundation rank's.

All that changed when Peter Stanchek joined the Harbinger Foundation. Confronted by Peter's sheer power and his rebelliousness, Harada's façade of control began to fray and his domineering tendencies became clear. Though she still believed in Harada's vision, Livewire believed needed to counterbalance Harada's immense power. Livewire aided Peter in his escape and went into exile.

Months, later when Aric of Dacia claimed Romania and his people's homeland, Harada asked Livewire to join Unity, the elite strike team he was forming to stop Aric and avert a large scale global conflict. Using her control over machines, Livewire stripped the X-O Manowar armor from Aric, donned it herself and easily subdue his people, ending the conflict.

Bonding with the armor enhanced Livewire's abilities, permitting her to now access nearly the full extent of the Harbinger Foundation's records. With Harada's darkest secrets now exposed to her, Livewire learned the true extent of his evil, and quickly marshaled the Unity team against her former mentor. Leaving the Harbinger Foundation behind completely, Livewire joined Ninjak, The Eternal Warrior, X-O Manowar in the newly formed Unity team.

During the team's mission to stop Dr. Silk and his hybridized memetic-biological virus capable of completely rewriting an infected individual's mind, Livewire discovered she alone was immune to the effects of the Silk virus. During the subsequent Armor Hunters invasion, Livewire learned this was a result of bonding with the X-O Manowar Armor. The armor infectious property of slowly replacing portions of the bonded host with herself had altered her physiology. Using her psiot abilities, Livewire suppressed the armor's urge to replicate, ceasing its infections of both herself and Aric.

Following the Armor Hunters' invasion, Unity went public, Livewire took on the public role of team leader, and the team secretly adopted the Armor Hunters sentient alien spacecraft GIN-GR's behalf. After facing threats from the War-Monger and the escaped Armor Hunters called Helix, the Unity team ultimately disbanded. The group was driven apart by the events surrounding the apparent death of their teammate, The Eternal Warrior.

Now working solo, Livewire joined the international effort to stop Toyo Harada in his attempts to declare a psiot nation on the Somali coast. While teamed with Major Charlie Palmer's H.A.R.D. Corps team to investigate Harada's hacking of P.R.S.(Project Rising Spirit) satellites, she discovered Harada's plan to import supplies for his space elevator program under the cover of humanitarian aid. Livewire's plan now is to turn opinion against her one-time mentor by exposing to the world the high-tech contents of the aid shipments to the Foundation Zone.

Remote Technomorphing: Amanda had the ability to psionically link with, interface and control computers and networking system programming. Effectively controlling the operational functions of any technological form she focuses on with her mind. After making contact with and bonding to the X-O Manowar armor, Shanhara, she gained an upgrade to her original abilities; now not only expanding her range and capacity with machines but greatly expanding how far they're reach stretches. Livewire now being able to control and assemble complex mechanical apparatus's outside of metal and scrap iron with a thought, creating useful weapons, gadgets and utilities via telekinetically constructing spare pieces of machine parts to siphoning and manipulating energy from her surroundings through her suit, such as electrochemical energy generated by plant matter.

Master Martial Artist: She boasts an advanced knowledge of martial arts technique, being avid enough in hand-to-hand combat to battle an immortal champion who'd supposedly been the catalysts for the various global conflicts which shaped human history.

Genius Level Intelligence: McKee learned everything she knows about mechanics, computer programming, artificial intelligence and engineering from her former mentor; Toyo Harada. As such she boasts a gifted mental acumen in regards to the subject of her powers.

Adept Weapons Expert: Livewire also has proficiency in use of various munitions and melee armaments.

X-O Nano Suit: Amanda had designed her own form of nano-molecular refitting suit modeled after Aric's X-O Armor. The lining of her costume is studded with countless fly like wing bristles enable her the ability to fly and gather enough electrostatic energy between them to cast plasmoid energy bolts. She'd further modified her costume's techno-shifting abilities, able to conjure up and/or assimilate scrap parts into it for creating artillery like an arm cannon. With some copper wiring lined into her nano suit, Amanda learned to siphon and polarize limitless energy using plant matter as a fuel source. 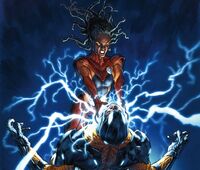 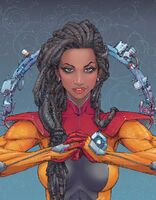 Livewire #12
by Chandler Ford
(November, 2019)
Add a photo to this gallery 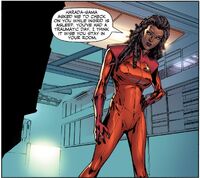 We don't need the governments of the world to debate and make backroom deals. We don't need them making decisions based on greed and personal interests. We can decide it right here. Just you and I. You've never tortured a child. But they did.

In this city, more than any other, I can feel the energy. The technology flowing. Every thought and feeling in high definition. There's a tangible electricity between a human and technology, Colin. Love, hate, passion. All of it channeled into keystrokes and touch pads.

Retrieved from "https://valiant.fandom.com/wiki/Livewire_(Valiant_Entertainment)?oldid=70974"
Community content is available under CC-BY-SA unless otherwise noted.