The Lost Land, or the Lost Valley, is a realm outside of regular time and space. Due to its special nature, it contains many anachronistic elements existing together such as robots, Freewills, dinosaurs, bionisaurs, and aliens. It is said that the Lost Land is the only place where time is absolute, meaning all of time is happening simultaneously except in the Lost Land which has its own independent timeline. This means people can enter from any era throughout history and exit into any other time period. It is also the home of the adventurer Turok.

The "Lost Valley" first appeared in Four Color Comics published by Dell Comics during the 1950s and the following ongoing Turok, Son of Stone. When Valiant Comics re-introduced Turok into the Valiant Universe the location still referred to as the "Lost Valley" Magnus, Robot Fighter #12, however, since Unity #0 it was then called the "Lost Land".

The Anti-Grannies and The Blood of Heroes

In 3216, the Anti-Grannies or United Anti-Grannies (U.A.G.), an organization of Japanese citizens who believed that Japan's fate belonged to its people and not to Grandmother, the freewill caretaker of Japan, settled a hidden base outside the normal space-time continuum in the Lost Land, a hub at the center of time where she held no dominion. From there, they set out to find a psionic they could inject with the Blood of Heroes to grant him mental control over electronic devices, including Grandmother.

After Grandmother found the Anti-Grannies’ base, she opened an entrance and sent Sho Sugino, the second Rai, to retrieve the blood and destroy her enemies. Armed with an energy gun in case the effects of traveling through the warp might temporarily dampen his abilities, and garbed in a suit designed to lessen the effect, Sho leapt through the portal.

Upon his arrival, Sho was amazed at the bits and pieces of a million cultures and times collected on a horizon that stretched on forever and wished that his poor, wretched father could see him. After what could have been only measured in days, Sho found the citadel of the U.A.G.

After a scuffle with Bionisaurs and Anti-Grannies, Sho found Uejo, the Anti–Grannies’ leader, and demanded that he give him the blood, but Uejo told him that the only way he could have it was if he fulfilled his programming and killed him since he did not wish to live in a world controlled by the likes of his master.

After Sho killed Uejo with two strokes from his swords, he stood over his corpse and asked his father’s spirit what he had become. When Sho grabbed the container that held the blood, he wondered aloud if Bloodshot controlled his own destiny, or, if like him, he was its slave.

Sometime later, at a predetermined rendezvous point, Grandmother opened a portal back to Japan and took possession of the container that held the blood. Troubled, Sho told Grandmother that he wished to discuss certain things with her, but she told him that she had reevaluated her selection program and, having decided that she made a mistake in choosing her champion, determined that the people would never accept him and she had to pick her future Rai from a lineage bred for that purpose.

After she informed Sho that she had picked the House of Nakadai for her breeding program, Grandmother told him that his service was no longer required, and that while she could not bring herself to terminate him as he had served her well, he knew too much to roam free, so she decided to abandon him in the Lost Land. As Sho cursed Grandmother, he rushed to the portal, but it vanished before he crossed it.

Years later, when a voice asked Sho why he continued while he feasted on the carcass of a Bionisaur, he drew his sword and demanded that the voice show itself. As Mothergod appeared, she said that she had heard about the Rai, the wandering scourge of the Lost Land.

When Sho dared Mothergod and her monsters to attack, she instead urged him to tell her why he continued to hold out hope when outside that plane centuries had passed and his world was gone. After Sho asked her if Grandmother still ruled Japan, he told Mothergod that he had hope for justice when she told him that she did. Impressed with Sho’s resolve, Mothergod offered him a better destiny in exchange for his help to tame the wilderness for her seat of power from which she could reshape the known universe.

With nowhere to go, and with no true purpose for his life anymore, Sho allied himself with the queen of Hell and fought in her unholy war, but he had merely pretended to sell his soul for a bowl of ramen noodles, as the truth was that he still held out hope.

Aware that his destiny was to face Mothergod in battle, Sho embraced it, for it was still a better destiny than the one he had before.

After Mothergod moved her Rainbow Tower to the Lost Land from North Am, she outfitted the dinosaurs that she found there with intelligence-boosting implants than turned them into "Bionisaurs".

In the aftermath of the battle between Mothergod and Phil Seleski, her Unity reactor created a black hole that swallowed the Lost Land, which ceased to exist, until the Chaos Effect brought it back.

...and beware the dinosaurs and bionisaurs – some of them may bite! 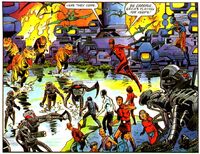