Nicole "Nikki" Finch is very talented gymnast and a psiot left behind by Toyo Harada's Harbinger Foundation because her superpower (ornipathy) is considered worthless. She is a member of Livewire's Secret Weapons team. 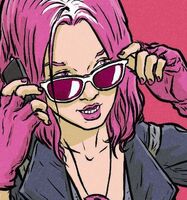 And so I was just sitting there when I heard these two people talking about my lunch but then I turned and looked and it was actually two pigeons! -- Like literal birds but I could understand them, like what they were saying. They all stared at me and so to make sure I wasn't y'know, crazy, I asked a jogger if they heard anything and she just said the birds were cooing a lot, so well, I guess that doesn't mean I'm not crazy but this is it, I feel it!