Ninjak, or Ninja-K, is a former special agent of MI-6's Ninja Programme. He is the greatest mercenary in the Valiant Universe and an expert in many different types of combat. His secret identity is Colin King, a British millionaire playboy who makes his services available to the highest bidder.

Ninjak, the ruthless and charming, super-spy and mercenary for hire, was born Colin King, wealthy son of privilege. For the Kings, espionage was the family business, and Colin's parents both served as clandestine operatives with MI6. Inattentive at best when they were home, his parents' work kept them away, for months at a time, and the young Colin's upbringing was left to his family's brutal butler. At his hands, Colin received his earliest training in the deceit, ambush, and self-sufficiency, of the MI6 master spy.

On reaching adulthood, Colin King left his family behind and quickly fell into the folds of the intelligence community. Upon joining MI6, Colin's training agent was Angelina Alcott. Against MI6 policy, the two soon began a secret affair. A year later she would be killed by Xaman, an assassin and acolyte of the Undead Monk – when Colin broke protocol and inadvertently led to her death. Lying about his own part in her death, Colin stayed with the agency to hunt down Angelina's killers alongside his new handler, Neville Alcott.

The two tracked the Undead Monk to a remote monastery in the Himalayas. Colin infiltrated the group, joining them as a student. There under the Monk's wordless tutelage, Colin's mastery of the martial arts was completed. Colin succeeded in killing Xaman, but was banished from the monastery before he could complete the mission and kill them all. Years later, he would encounter the Monk's most gifted students in their guise as the Shadow Seven.

His training complete, Colin rose in the ranks of MI6, becoming the lead agent of their newly formed ninja program, gaining the designation of Ninja-K. Working now as a freelance agent and inheriting his family's wealth and estates, he lived a dual life as a wealthy financier and a secret agent.

It was in this capacity that he unwittingly took the contract to kill Aric of Dacia and retrieved the X-O Manowar for the Vine infiltrators that had assumed leadership of the MI6. When Aric and a Vine traitor named Alexander Dorian revealed the true identity of Ninjak's employers to him, the three worked together to eliminate Vine Plantings all over the agency. Ninjak would again work side by side with Aric when they formed the superteam Unity, though the relationship between the two remains tense. Recently, the two have teamed again to track down and eliminate again the Vine plantings led by Aric's enemy, Commander Trill.

Ninjak's vendetta against the Shadow Seven would resume when he was tasked with infiltrating their underworld weapons dealing organization known as Weaponeer. This mission brought him face to face with Roku, an enforcer for the Shadow Seven whose relationship to Ninjak's is more than it seems. Ninjak eliminated Weaponeer's leadership and assumed control of the organization to find the remainder of the group, surrendering them to MI6 custody.

Following that mission, Ninjak was teamed with the voodoo mystic known Punk Mambo for a mission into the alternate dimension known as the Deadside to retrieve a lost MI-6 team. There the two encountered and fought The Magpie, whose attempts to break his mystical bondage to the necromancer Master Darque had led him to capture several members of the Shadow Seven from MI6 holding facility. Ninjak and Punk Mambo defeated the Magpie and his ally Ember and returned from the Deadside with Jack, the MI6 team and the missing members of the Shadow Seven as prisoners.

Since then, Ninjak has found himself the subject of an insidious plot to destroy his life, both personally and professionally. Framed for murder, his castle in ruins, the records of his existence destroyed and his own employers hunting him down. Ninjak finds he's beside himself while trying to find those responsible.

The following information is highly confidential!

Ninja-K projects sense of humor despite the terrible things he's seen and done. While guided by a moral compass, he has proven on numerous occasions in a grey area, understanding what needs to be done for the greater good and pursing it at whatever cost necessary. He is a well-trained agent with REDACTED. He is not as easy to control as past operatives. 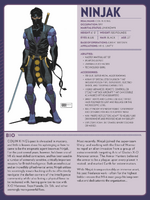 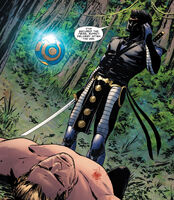 Why is it whenever I employ a stratagem, the idiot I use it against labels me a coward?

Makes me miss the old days of simple assassinations. When you could just stick a knife in a bloke's kneck. Simpler times.