Punk Mambo is a British magic-user who battles the forces of evil. Her stylistic sensibilities are heavily rooted in London punk culture while her magic is very heavily based in Voodoo. She is usually seen as an ally to Ninjak, but has worked with other heroes such as Shadowman as well.

Victoria Greaves-Trott is a Mohawk-sporting, voodoo priestess. Dwelling in the Bayou outside New Orleans, Punk Mambo helps the wayward, troubled, and damned remedy what afflicts them for a price.

As a teenager in 1970s London, young punk rocker Victoria was abducted by Houngan, a lecherous voodoo priest. Much older than his youthful appearance suggested, the houngan- then operative under the name Joe Mayhem- collected Victoria and other young souls like her, forcing them into debauched rites and practices that fueled his immortality. Victoria observed Joe's rites closely, and on breaking free, used their power for herself. Years later she would return to London to exact her revenge on Joe Mayhem and so-called friends who had placed her in his power. Ever the rebel, Punk Mambo left Mayhem humiliated, but alive.

It was Punk Mambo who Jack Boniface turned to when he was trying to rid himself of the loa that gave him his powers of Shadowman. And when MI-6 needed an occult expert to guide a team into the Deadside, they naturally turned to the most mystically accomplished British national they could find. When this team went missing, Punk Mambo would enter the Deadside side-by-side with Ninjak to retrieve them. There, the two of them faced a Shadowman slaved to the will of the villainous necromancer Master Darque. Ninjak and Punk Mambo subdued Shadowman and returned the lost team and the fallen hero into the hands of MI-6.

A master of Voodoo rites, Punk Mambo commands many magical abilities and defense, including enhanced senses, astral projection, a cast of illusions and spells, and more; her powers also appear to have arrested her aging.

She can also summon, control, and ride the Loa Ayezan, granting her the following powers and abilities: 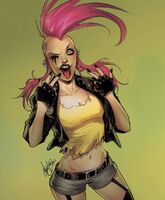 That's my bootleg of Sid Vicious. He's what you might call my spirit guide. I used to play truant from school and hitch down to London, where I'd snog guys in exchange for punk paraphernalia.