Quantum and Woody are two foster brothers who function as an inept superhero team. Eric Henderson, Quantum, is the more serious and science-oriented of the two. Woodrow Henderson, known by his nickname Woody, tends to be more of a goofball screw-up. Their pet goat, Vincent, functions as the team's sidekick and mascot.

A pair of foster brothers named Eric and Woody reunited after years at their father's funeral. After initially fighting, Woody managed to convince Eric to investigate their father's mysterious death at his lab. Their investigation at the physics lab led to a massive accident, with their father's project melting down. The brothers somehow survived, and the quantum energy granted them superpowers, with Eric's manifesting as forcefields of many shapes and sizes, and Woody's manifesting as bolts of energy. This came at the price of forcing both of them to wear a golden band they must "klang" together every 24 hours to stay alive.

Using their new powers, Woody and Eric decided to act as superheroes to continue investigating their father's death. Eric adopted a secret identity, "Quantum", and made a costume complete with mask and (initially) cape. Woody, however, refused to use a name or costume. Their investigations lead them to discover Edison's Radical Acquisitions, or the ERA, an organization of scientists trying to uncover the secrets of Derek Henderson's work. The ERA kidnapped Woody, planning on experimenting on him to study his powers, but Quantum managed to infiltrate the lair and save him. While fleeing the base, they also freed a strange, superpowered goat, as well as a clone named Miss Sixty-Nine.

After the brothers got back to their normal lives, Eric went back to work at the private military contractor Magnum Security. His boss Terrence Magnum discovered Eric's identity as Quantum, and promoted him to Magnum Security's "personal superhero". Magnum sent Eric--and Woody by extension--to Montana in order to shut down a far-right terrorist organization called The Last Guard, who were seeking to start a war to stop liberals from controlling the world. After failing to infiltrate the base, the brothers learned that the rednecks didn't want a war, and it was a setup so Magnum Security could get a defense contract with the government. As Magnum prepared to just wipe the town off the map and be done with it, Quantum rallied the rednecks against "The Man" who tried to set them up. Woody sent evidence of Magnum's plan to the US government, and not long after, Magnum was warned that Magnum Security would be labeled a terrorist organization if they were connected to the combat in Stronghold, causing Magnum to stop his attack, but not before firing Eric.

Not long after the incident with Magnum Security, as Eric and Woody tried to get jobs and stabilize their life, Eric discovered that, as a teen, Woody was a bank robber. The fight this caused led Woody to join up with an old flame of his named Jacklean, and rob a museum with her--the same museum Eric had recently been hired to guard. Eric tried to stop the robbery, only to focus on fighting his brother when he learned he'd slipped into a life of crime again. Woody was arrested, and decided that to save his own skin, he needed to rat on the ERA.

The ERA's secret leader Thomas Edison learned of Woody's plans, however, and kidnapped the brothers. Edison revealed himself, and offered a deal--in exchange for allowing the ERA to study their powers, Edison would free the boys from the need to klang, as well as reunite them with their father. Apparently, years prior, the ERA had taken a back-up of Derek Henderson's memories, and placed them in the very same superpowered goat Eric and Woody had taken from them. The duo didn't bite, however, and tricked Edison into confessing his bizarre crimes over a walkie-talkie, causing the police to raid the base, and allowing Woody and Quantum to escape with their lives, powers, and their pet/father.

Quantum and Woody Must Die!

After their takedown of the ERA, Quantum and Woody became more and more popular. People actually liked them as heroes, and thanks to "couples'" counseling, they were even becoming closer as brothers and partners. Not all was as it seemed, however, as their therapist Doctor Henrick Skinner had spent weeks subtly hypnotizing and drugging the brothers, with the end goal of ruining their public reputation as revenge for a previous injustice. He used the drugs to make them perform violent acts, normally just being extra violent while stopping crimes, such as when stopping burglars from robbing a sketchy pharmaceutical company caused their getaway driver to become brutally injured. When this didn't hurt the brother's reputation, Skinner's allies teamed up with the pharmaceutical company to give themselves superhuman powers to attack the brothers directly. Being hypnotized, neither Quantum nor Woody knew this was happening, but they knew something was wrong. While they tried to figure it out, Eric started a relationship with a woman named Sheila Weismann who he accidentally revealed his superhero identity to. The problems with Skinner's Grudge League came to a head when the now-empowered goons attacked the brothers at the zoo. While Quantum managed to fight off the goons, Woody's hypnotic triggers were activating, making him kill a panda bear, which was live-streamed across the internet, fulfilling Skinner's goal. The brother's friend in the police force, Detective Cejudo, discovered the mind control while arresting the goons and told the brothers what was happening. While Woody went to Skinner, Eric went to Sheila, scared she was secretly working against them too. But he didn't even interrogate her, deciding trusting her was more important than paranoia.

Not long after the incident with the Grudge League, it was discovered that Vincent Van Goat, and by extension the duo's father, was somehow pregnant! After a grueling period of labor, Vincent finally gave birth, but not to a baby goat, but instead to a fully-grown duplicate of Derek Henderson! Vincent's body flushed it's quantum powers and Derek's consciousness out, into a new, unstable energy body. This form was similar to what Woody and Eric had become after the accident gave them their powers, but without a Quantum Band to stabilize him, Derek was running out of time. He spent one final day with his sons, and despite Eric's desperate attempts to stabilize his father, he faded away into energy.

Not long after the death of their father, Woody discovered his birth father was alive, and that Eric had kept that knowledge from him since he knew Woody would react badly. This made Woody furious, and when Eric refused to go with Woody to find him, Woody snapped and attacked Eric. His anger made him easy for a mysterious ninja named Negative One to manipulate. Negative One told Woody that she worked for the same mysterious benefactor as his father, and at her request, Woody kidnapped Quantum so he could visit his birth father in Australia. There, they met a young, smart boy named Kid Tesla, a descendant of scientist Nikola Tesla and rival to the ERA. And Tesla wasn't lying, he indeed employed Rutherford Van Chelton as a sound engineer. As Woody bonded with his dad, Quantum discovered that Tesla wanted to use the heroes' powers to create an infinite source of energy to fuel a planet-wide brainwashing. After being captured by Kid Tesla's ridiculous creations, and subsequently saved by Negative One, Rutherford sacrificed himself to destroy Tesla's plans. Eric and Woody made up, and agreed to work together as heroes again.

Soon after their adventures in Australia, the heroes had returned home, only find they could not use their powers, or even properly Klang. The technopath Livewire had shut down all the power in the country, including in the brother's Quantum Bands. After a day of trying to save people from the chaos, they seemingly disintegrated into energy. Instead of dying, however, the duo were sent into a strange dimension of creation known as the "Otherverse". The Otherverse created entire fake lives for them, with Quantum being a powerful superhero, and Woody being a popular but depressed playboy. Woody was soon exposed to the illusion, and went to talk to his brother, who was still caught up in the dream. After a quick fight, an accidental klang sent them back to the real world.

They were not alone in the real world, however--they quickly discovered their friends and loved ones from the other world were somehow in the real world. The raw creation energy of the Otherverse was leaking out, forcing Quantum and Woody to confront the monsters that came with that. While defeating Kaiju was relatively simple, they soon encountered a powerful reality warper called Infomercial. Scientists at the government organization G.A.T.E. informed the brothers that Infomercial was a living embodiment of the Otherverse's limitless creation potential, and the only way to stop him was to send him back where he came from. Since it was forgetting to Klang that opened a hole to the Otherverse in the first place, it only took excessive Klanging to close the portal. After being tested by G.A.T.E. for their potential as agents of the organization (and failing), Quantum and Woody took their Otherverse loved ones on the run, fleeing G.A.T.E. and it's desire to keep them all locked up. 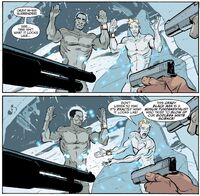 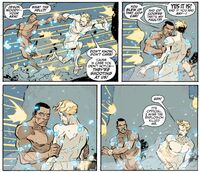 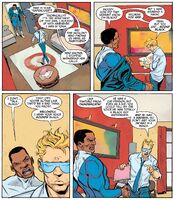 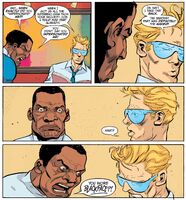 Retrieved from "https://valiant.fandom.com/wiki/Quantum_and_Woody_(Valiant_Entertainment)?oldid=70804"
Community content is available under CC-BY-SA unless otherwise noted.