Rai was the spirit guardian of New Japan in the 41st Century, chosen by Japan's leader Father to be their nation's protector. He is the tenth Rai in a succession of heroes chosen by Father. When he learned of Father's rule as a cruel dictator, he rebelled, and now leads the people of New Japan into a new, hopeful future.

In the distant 41st Century, the nation of Japan had long grown outside it's own borders. First the country transformed their islands into a massive, inter-connected artificial marvel, before lifting them off the Earth entirely to become the massive, floating, self-sustaining nation of New Japan. The docile citizens of the floating empire lived in countless "sectors", with each having its own theme, based on aesthetics or industrial uses. They live alongside Positrons, human-like AI. The nation's leader, the mysterious AI named Father, established a long lineage of spiritual guardian heroes for the nation, all named "Rai". Rai X was the tenth in this line. Born to a human woman, the chosen "bride" of Father, and combined with technology and artificial intelligence, the boy was raised by Father as the perfect warrior, guardian and weapon. He was not told of the previous Rai, or of his half-human origins. Rarely seen in public, the new Rai quickly gained folkloric status, with some people fearing him, and others almost worshiping him.

New Japan is not without it's enemies, which is why Rai is necessary. Anti-technology extremists named Raddies were implicated in the first murder in countless years, sending Rai on the hunt. His investigations lead him to work with a young girl named Lula Lee, and lead him into the crosshairs of a secret agent named Spylocke and a centuries-old inventor and clone expert Doctor Silk. Spylocke kidnapped Lula while Rai confronted Silk, and the old man revealed to Rai his true nature as a half-human, and that he was not the first Rai. The most important piece of information the Doctor revealed, however, was that the murder that kick-started Rai's investigation into the Raddies was of Rai's own mother. When Rai confronted Father about his lies, the AI stated he didn't tell the hero of his origins because they would weaken him. Rai, however, thought otherwise, deciding Father's manipulations and lies had to be stopped.

Working with Lula Lee and Spylocke, and more cautiously Doctor Silk, Rai began laying plans to overthrow Father. They gathered allies, like the monstrous Izak, an emancipated Positron named Momo, and even the banished eighth Rai. As their plans developed, Rai's relationships with his allies grew. He became like a father to Lula, and developed feelings for Momo. Before they could declare war on Father, Rai had to stop a war between the Raddies and a gathering of Positrons. Rai managed to unite the armies against their common enemy in Father, and their fight against Father's security robots caused a revolt in practically every sector of New Japan. Their entire plan fell apart, however, when Silk betrayed the alliance, hoping to get in Father's good graces.

Knowing their plans, Father sent an immensely powerful robot called Rai XI, or "X-Eye", against Rai. While Rai fought his hardest, X-Eye defeated him, and threw the hero out of New Japan, banishing him to the world below.

Disconnected from his power sources in New Japan, Rai found himself lost, weak and alone on the surface of the Earth. Shocked to discover that it still supported life despite the claims of Father, Rai made an alliance with a clan of surviving wasteland-dwelling humans. One of their members, a slow-witted and massive but kind man named Lemur, led Rai to a cherry blossom tree that served as a memorial for a long-forgotten warrior who stood against Father. Rai found both the warrior's sword, and his own wounds healed by the miracle tree. His strength restored, Rai and his new friend Lemur tried to find a way back up to New Japan. At Lemur's suggestion, and with the help of one of Rai's old enemies who he cast out of New Japan named @x, Rai journeyed to the land of Ark-Kansas to find a "warrior eternal". The ancient soldier, a man named Gilad Anni-Padda, agreed to help Rai in his cause, but as the warrior prepared to aid Rai in reaching New Japan, the massive sky city began to break apart, as countless pieces began to fall to Earth like comets.

Knowing they didn't have long to save the people of New Japan, Gilad brought Rai to an ancient, powerful war machine called the X-O Manowar Mech-Armor Class. Rai piloted the mech up towards New Japan, attempting to stop the pieces from crashing to the ground, but too many fell too quickly. Instead, he turned his attention to Father, who was horrified his banished son was willing to use such a massive weapon of mass destruction. As Rai piloted the mech towards Father, the AI activated his mysterious Komodo Protocol, transforming the floating city into a mechanical, flying dragon. Rai attempted to battle the titan head-on, but even the X-O armor was to weak to fight an entire city. Instead, he piloted the mech inside the dragon, near the Father's computer center. Ambushed by robotic beasts, Rai and his friends were swarmed, but a saving grace appeared in the form of an army of castaways and criminals that Father had labelled "undesirables". With Rai's allies handling Father's armies, Rai prepared himself, emotionally and physically, for the fight of his life. As Rai battled X-Eye, his ally Lemur leaped in to aid the hero, but paid the ultimate price as X-Eye bashed his head in. Enraged, Rai began slicing Father's robotic body apart, ignoring and refusing Father's desperate attempts at bargaining and negotiation. Father's death caused New Japan to completely fall apart, but thanks to Rai and his allies' preparations, deaths were kept to a minimum, and Rai prepared to help rebuild society on the surface of the Earth.

A year later, Rai served as the ruler of what was left of New Japan. Using the rubble of the sky city, a new civilization formed, where Positrons and humans were equal--at least, in theory. The society collected important or useful trinkets from other fallen sectors, and gathered refugees when they could. Despite his attempts to keep the peace, Rai was brought into battle again when a backup of the Father AI resurfaced, having survived the fall of New Japan, and now in control of a swarm of nanites, and leading an army of cultists. This Father was incomplete, however, forcing him to hunt down other, similar backups of his AI, and giving Rai and his allies time to prepare for war. Blaming himself for not killing Father in time, Rai gathered more allies, such as the savage Kor'Tunga Clans. Rai attempted to warn Sontaku Sector of the coming of Father, but were too late, as the AI led his armies and a massive, floating warship against the colony. During the battle, Rai met his very first predecessor, a young boy named Raijin. While Rai and his allies drove Father back, they could not truly defeat him, and Sontaku Sector was destroyed. As Father retreated to lick his wounds, and the colony tried to rebuild society in a new location, Rai and Raijin set off to find the rest of Father's backups, and destroy them before the AI could reclaim its full power. 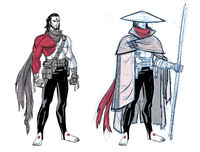 Design by A.J. Jothikumar
Add a photo to this gallery

Something has changed. The Raddies have lost all regard for human life. The first murder in one thousand years and now this? It feels as if things are spiraling out of control. Out of control... by design.

Something is changing. I can feel it. Like the ground beneath me is shifting. My perception. My idea of what Japan is has always been one of an ideal. But the longer I spend in its streets, the more I see something else. I see the imperfections. The seams. The cracks. If our borders harbor one individual willing to take a human life...? Then what else is our nation hiding?

Perhaps what the world needs now is not a leader, but a shepherd. Someone who can guide the people of this desolate world, not lord over them. Someone to remind the people what it means to be civil to one another. Someone who can unite humanity and to allow them to chart their own course.

Retrieved from "https://valiant.fandom.com/wiki/Rai_X_(Valiant_Entertainment)?oldid=71411"
Community content is available under CC-BY-SA unless otherwise noted.