Reboot: Shadowman (Volume 4) #1 (November, 2012)
Jack Boniface, better known as Shadowman, is a young man from New Orleans. His supernatural abilities come from the Shadow Loa, an immensely powerful (voodoo) spirit that has been passed down his bloodline and which he bonded with as the latest Shadowman, the one who protects the world of the living (Liveside) from the world of the dead (Deadside).

As the Shadowman, Jack had been working with the Abettors to battle spirits and demons, and to protect the world against the necromancer Master Darque. Later, Jack was tricked by Master Darque to serve him in the Deadside as the menacing figure known as Magpie. Unbeknownst to Jack, Master Darque's binding were only psychosomatic and he could have left at any time but he didn't. Eventually Jack was freed from the Deadside by Ninjak and Punk Mambo.

In the dark, twisted timline of the "Stalinverse", Jack lived in New Orleans prior to the invasion of Russian forces. Using his dark, loa-granted powers to hold off the invading army, he was succesful in protecting his family and friends until the Russian superhumans Aric, Son of the Revolution and Komandar Bloodshot managed to defeat him.[1] He was forced to join the Soviet army as their unwilling weapon, until Divinity returned the world to normal.

Fear of the Dark

Five years after first entering his pact with Darque, Jack crawled his way back to the world of the living. Rescued for his near-comatose state by his old ally Alyssa Myles, they began working together to investigate the Shadow Loa's true nature and hopefully free Jack from it. This investigation led them to the bad side of powerful loa Baron Samedi. Battling his minions, Jack, Alyssa and their allies were seemingly overwhelmed, until a quick-timed summoning ritual by Alyssa and a sneak attack by Jack seemingly put them on top. A well-placed curse on Jack's Shadow Scythe, however, disabled the hero, and allowed Samedi to kill Jack, his corpse collapsing in front of Alyssa.

Death was, unsurprisingly, not the end for Jack Boniface. Instead of journeying to the afterlife, Jack's soul slipped back in time, attaching itself to other people who wielded the Shadow Loa throughout history. Seeing the adventures of his great-grandfather Maxim Boniface during the 1940s, and then those of Marius Boniface, the first Shadowman, Jack became terrified to find his soul just kept falling through time. Astonishingly, his soul found someone else to latch onto: Standing Wolf, a tribal warrior in prehistoric Africa. He witnessed Wolf make a pact with the Loa to save his tribe, becoming the real first Shadowman, before being sucked back into the present. He awoke after his own funeral, now armed with the knowledge of how far back his legacy truly goes.

The symbiotic relationship with the Shadow Loa grants Jack an assortment of powers and abilities. These include... 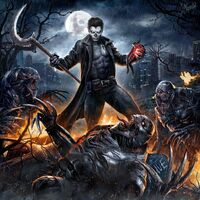 Tales from the Deadside
by Dusan Markovic
(September, 2015) 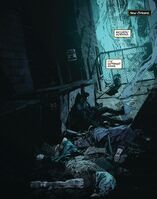 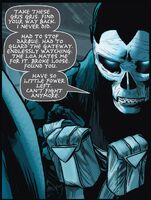 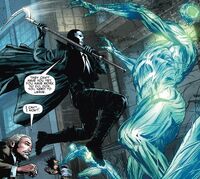 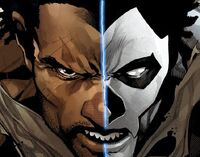 I'm not something you see every day. I'm the last thing you'll ever see. I'm Shadowman.