Phil Seleski is the superhero known as Solar, Doctor Solar, or Solar, Man of the Atom. He is a scientist who gained energy-manipulation powers during a nuclear accident.

Solar is one of several characters in the Valiant Universe not native to Valiant Comics. The character was originally published by Gold Key Comics in the 1960's until they went out of business. Valiant acquired the rights to Solar along with Magnus, Robot Fighter and Turok, Son of Stone. This is dealt with in-universe by having Phil Seleski be inspired by the original "Doctor Solar" comics.

In Muskogee, Oklahoma, Philip Seleski grows up a comic book lover. His favorite comic, Doctor Solar, Man of The Atom, inspires his interest in science and determines his field of study. Like his hero, Phil excels in the sciences and becomes a brilliant nuclear physicist. His crowning achievement is the design and construction of the first nuclear fusion reactor for the Edgewater Advanced Fusion Energy Research Center.

During the reactor’s first test run, something goes horribly wrong. There is a core breach, and a nuclear meltdown is imminent. Doctor Seleski, after running out of ideas to stop the disaster, throws himself into the reactor’s core in a moment of desperation. As a conscious Seleski floats in the plasma, he wishes that the whole incident will stop, and it does. The anti–proton pumps stop leaking and all of the deadly radiation simply disappears.

Seleski survives the incident and makes a startling recovery. However, things will never be the same for the good doctor. The accident somehow transforms him into a being of pure energy. He soon discovers that he has the power to manipulate energy in all its forms. Empowered, Phil takes it upon himself to ensure that no other accidents like the one that changed him will ever occur. Policing the world, he eradicates nuclear facilities that he deems too dangerous or unsafe. This brings him into conflict with an unnamed governmental organization that enlists the aid of the equally–empowered Erica Pierce to stop him. In the ensuing conflict, Seleski inadvertently creates a black hole that destroys his world in an attempt to tame his out of control power.

Through unexplained means, Phil finds himself in the past at a point in time before the accident happened. He also discovers that the world has subtle differences, the extent of which he soon realizes. He sets in motion a plan to prevent his past self from making the same mistakes, but when faced with an insurmountable obstacle he suffers a schizophrenic attack that, given his bizarre physiology, literally splits him into two persons; one a physical manifestation of his guilt, and the other an incarnation of his childhood hero, Doctor Solar.

“Born” with the collective memories of Phil Seleski and his own comic book origins, Doctor Solar believes that he exists only to kill Phil, while becoming colder, darker, and more cynical, Phil realizes that Solar has taken all of the attributes that make him a good person. During a final conflict in the same reactor that spawned them, Seleski convinces Solar of his intent to save the world. Seleski absorbs Doctor Solar and emerges from the reactor at the point in time that his past self is about to hurl himself into its core.

In the process, Seleski observes that the fusion reactor is a sort of a "wish machine"; it allows him to make his childhood dreams, inspired by the Doctor Solar comic books, to become reality. Phil tells his past self that the reactor is granting him his wish to become superhuman, and warns him that becoming what he wants will only lead to catastrophe. Offering his past self the power, knowledge, and tools of God that he desires in exchange for his humanity and another chance with Gayle Nordheim, they merge and the fully recombined Phil Seleski successfully prevents nuclear disaster. Fulfilling his dream of being a hero, Seleski also earns a second chance at life as Solar, Man of the Atom.

As Solar, Phil goes on to have many adventures, fighting a wide variety of threats, from Spider Aliens to malevolent Harbingers to Mothergod. One of the differences that Phil discovers about the world he finds himself in after his trip through time is the existence of a number of strange and unusual people, some with extraordinary power of their own.

After centuries of life, Solar blows himself up in an effort to stop the Spider Alien invasion of AD 4001.

When Phil Seleski finds himself in the past after a horrible incident in which he creates a black hole, he suffers an incident where he literally splits in two. One of these personas is the actual comic book character of Doctor Solar from his childhood. He is a manifestation of Seleski’s overwhelming guilt in destroying the world, combined with his subconscious desire to become his hero. Seleski reabsorbs Doctor Solar during their final conflict.

This persona is the physical manifestation of Solar’s anger and warrior instincts that is created when Solar, under Master Darque’s influence, attempts to destroy the world. Geoff McHenry, John Veerhusen, and Gayle Nordheim intervene, and Gayle convinces Solar to fight the force controlling him. This conscious act gives “birth” to the Destroyer. The Destroyer is responsible for the destruction of the Spider Alien base on the moon. Having made his way home in the distant future, he plays a pivotal role in ending the Chaos Effect.

See The Destroyer for more information and the character's appearances. 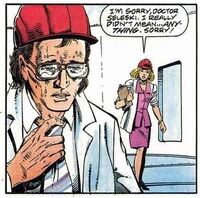 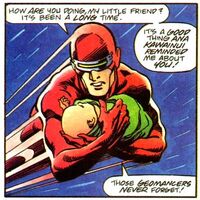 I play dice with the gods... and everyone else loses.

Retrieved from "https://valiant.fandom.com/wiki/Solar_(Valiant_Comics)?oldid=57384"
Community content is available under CC-BY-SA unless otherwise noted.