The Chaos Effect was a Valiant Universe crossover storyline published in 1994. The story had a tie-in with every Valiant series published at the time.

This article does not have a synopsis recorded yet. 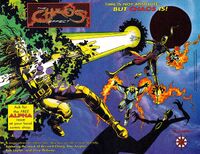