The Dying One (Valiant Entertainment)

The Dying One is a quasi-immortal in the Valiant Universe. Every time he dies he is instantly reincarnated with the full knowledge of his previous lives. The Dying One starts observing and chasing Gilad trying to find out the secret behind the Eternal Warrior's immortality.

The Dying One has existed across millennia. While his precise age is unknown, he has been around since as far back as ancient Mesopotamia. Every time he dies, he is reborn again in a new life, as any gender, race, creed or in any location. He retains the memories of his past lives, and as such dedicates any of his given lives to gathering power and wealth and knowledge, in an attempt to end this cycle. Very early into this cycle, he discovered another immortal man named Gilad, who was truly immortal. The Dying One dedicated the next several millennia to investigating and manipulating this Eternal Warrior, in an attempt to discover the secrets of his eternal life. Most of these actions, including those as major as stealing Gilad's son Kalam, were done without the warrior knowing who was truly manipulating him.

In the 21st century, the Dying One gathered all his resources, allies, connections and influence to build a massive labyrinth inside a mountain in Kashmir. When Gilad died in battle with the evil Master Darque, the Dying One stole his body from its grave. When Gilad inevitably returned to life, he found himself trapped within the labyrinth. Attempting to escape, he found the Labyrinth filled to the brim with automated weapons, robots, traps and magic spells. Every time he tried to escape, he'd be killed, and his body moved deeper into the labyrinth to try again when he awoke. This allowed the Dying One to study the nature of Gilad's powers, and his weaknesses and strengths. Gilad soon figured out a method of escaping, by turning the labyrinth's own defenses against it. The Eternal Warrior confronted the Dying One in his office, and as they engaged in a viscous sword fight, the Dying One revealed that he was responsible for stealing Kalam. This sent Gilad into a rage, killing the Dying One's physical form and setting the labyrinth to self-destruct.

The Dying One, of course, returned, this time in the body of a Midwestern housewife. Still seeking true immortality and control, he gathered himself a coalition of other immortals. Arming themselves with artifacts from the Deadside, and technology left over from the invasion of the Armor Hunters, they aligned with the Mexican government to gather power. The Dying One would not abandon his efforts to copy Gilad's immortality, however, and soon came across Gilad's corpse. With all his knowledge of Gilad's cycle of death and rebirth, he deduced that Gilad no longer wanted to return to the world of the living. Making deals with demons and preparing spells, the Dying One and his allies prepared a dark rite. Their preparations were almost interrupted by the coming of several superheroes, but the rest of the Coalition held them off. One hero, Ninjak, slipped through, and confronted the Dying One. His efforts were in vain, however, when the spells were completed and Gilad's body was possessed by a monster from the Deadside. As the monster battled Ninjak, the Dying One killed himself with an enchanted dagger, that used the monster's energy to cast the One's spirit into Gilad's body. Now possessing superhuman strength, a form Ninjak was hesitant to hurt, and the true immortality he so craved, the Dying One drove the heroes off. He and his Coalition then proceeded to vanish off the face of the earth.

Retreating to a base in Chernobyl, the Dying One continued experimenting on the body that now belonged to him. Using a magic amulet, he managed to bind his soul to his body, preventing even death from sending him to another body. He was confronted once again by Ninjak, with the mercenary discovering the nature of the amulet. When the Dying One realized his weakness was found, he pleaded with Ninjak, claiming that he would return in a new body and that Gilad would not be able to return to his own. Ninjak took a chance, destroying the amulet and killing Gilad's body. The Dying One's statements seemed to be a lie, however, with Gilad awaking in his own body and the Dying One being nowhere to be found. 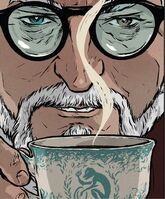 I have died with the memories of more than one hundred lifetimes. I have been born with the same. Screaming with the rage of countless thoughts my infant body was powerless to voice. Once, I was capitán of a galleon fleet. I was felled by a pox. One breath later, I was a tribeswoman that would not see its first sailing ship for decades. I died before the ship arrived. Everything I had achieved as capitán...impossibly out of reach. I have orated on the marble floors of Rome. Been soft landing for a Trojan arrow. Counsel to pharaohs. I have seen the eras, one after the next. I desire what I have always desired. What everyone desires. Control.