Unity is a team of superheroes in the Valiant Universe. They originally came together to battle X-O Manowar, although he would later join the team. Their purpose is to deal with threats that no single hero could battle alone.

Due to a series of events with former members gone rogue or missing there no longer is an active Unity team as of 2018. GATE briefly considered reforming the team with X-O Manowar and Quantum and Woody, but the idea fell through when Quantum and Woody were deemed poor candidates.[1]

For hundreds of years, heroes and superhumans have found it better to work together than alone. From Sir Kwain's team of medieval adventurers, to World War I's "Unit-Y", numerous similar teams have formed throughout the centuries. While these groups were all formed relatively independent of one another, there are two threads that tie them together–the membership of the Eternal Warrior, and the threat of the War-Monger. Both are immortal warriors, but while the Eternal Warrior is a hero, the War-Monger both fuels and is fueled by human conflict. Each generation found a way to get rid of the War-Monger, but she always resurfaced to antagonize the world again.

To Kill A King

In the 21st century, the global geopolitical climate was thrown into chaos when Visigoth warrior Aric of Dacia, wielding a powerful alien armor that made him a one-man army, conquered Romania. He sought to make it a homeland for his people once more, but this did not sit well with Toyo Harada, psiot and businessman. Toyo gathered his forces to overthrow the warrior-king, but when his own elite team of superhuman soldiers failed, he realized he needed to look outside his own personal allies. Harada gathered together British superspy Ninjak, immortal soldier Eternal Warrior, and his own star pupil Livewire. Together, the team infiltrated Romania and attacked Aric, managing to steal his alien armor, but Harada's team realized that he was in the wrong. The armor was Aric's, and Harada simply wanted to consolidate power for himself. Stealing the armor back, they returned it to Aric and defeated Harada. Livewire left Harada's custody, and the team agreed to aid each other if the need ever arose.

Making good on their agreement to work together again, Ninjak gathered the team to deal with a quickly advancing threat. Livewire, now operating as an agent of MI-6 in exchange for being kept safe from Harada, went missing on a routine mission in Taiwan. Ninjak, concerned her disappearance is connected to the recent return of his enemy Dr. Silk, brought in the Eternal Warrior and X-O Manowar. Their investigations uncovered a plot by Silk to conquer the world with a mind-controlling virus, and while they were able to rescue Livewire and stop the virus at it's source, it was impossible to guarantee that the virus wouldn't activate again.

Invasion of the Armor Hunters

X-O Manowar's armor is not the only one of its kind. There are many such armors across the universe, and as with any powerful weapon, there are those who seek to destroy them. The Armor Hunters see the X-O Armor as a plague upon the universe, and seek to exterminate them, and those who wear them. Aric refused to surrender to them, however, so they destroyed Mexico City and unleashed armies of alien hounds across the globe. Unity, leaping into action, sent the technopathic Livewire to destroy the Hunters' orbiting base GIN-GR. While she succeeded, the ship crashlanded in Los Angeles, destroying the city and unleashing the aliens into the city. Meanwhile, Ninjak and Gilad managed to contain the attacks of the Hounds. In the ruins of downtown LA, Unity and their ally Bloodshot managed to kill or detain all of the Hunters, leaving Aric to kill their leader.

After the Armor Hunters crisis was averted, Unity became more public, hoping to calm public fears of increasing superhuman activity. Detailing their various missions to the public, with several members even revealing their secret identities, the world began to trust superhumans again after the destruction of Mexico City. However, representatives of numerous countries discovered that Unity had taken genocidal robot GIN-GR into their custody, secretly and illegally. They assembled their own superhuman strike team, named "The United", to confront Unity and force them to turn over GIN-GR. After the team's MI-6 representative Neville Alcott refused to do so, United member Ultimo unleashed a blast of radiation that destroyed the base containing the alien robot. Alongside temporary new member Zephyr, Unity managed to defeat the attack by the United, but GIN-GR was exposed to the outside world.

The Coming of Divinity

Decades ago, Russian astronaut Abram Adams was sent to space. For 55 years, he was missing, until one fateful day in 2015 a near omnipotent man in an astronaut suit landed in the Australian Outback. With immense powers over time and space, a cult began to form around him, and much of the world began to become concerned. Despite reports the god-like man named "Divinity" is benign, Unity was sent in, with a plan to contain Divinity and discuss with him safely. Almost immediately after touching down in Australia, all four Unity members were cast into different strange, empty worlds, where they seemingly lived alone for years, struggling to survive. It was Ninjak who first cracked the code, realizing that this was not truly teleportation, but rather an illusion, lasting only a few seconds but stretched to feel much longer. Journeying into the telepathic "worlds" of X-O Manowar, Livewire, and finally the Eternal Warrior, Ninjak freed them from their telepathic prison, and the team resumed their attack on Divinity. While the Eternal Warrior distracted the Cult of Divinity, Livewire managed to trap Abrams in a containment pod, where he remained. It was later revealed he remained there by choice, and he could escape at any time. [2]

Return of the War-Monger

After a short break caused by a harsh fight with ex-Armor Hunter Malgam[3], Unity was reunited by a series of attacks by the ancient evil known as War-Monger. Seeking revenge on Unity for what previous incarnations of the team had done to her, she attacked each of the members of Unity, starting with Ninjak, defeating him in his apartment. War-Monger then attacked Livewire and used her to lure out GIN-GR, before assaulting Eternal Warrior and throwing him into the ocean. Her actions and powers beginning to sew chaos across the globe, Unity regrouped. X-O Manowar assailed War-Monger, his armor allowing him to fight her better than anyone, and lured her out to sea. Unity, alongside a psiot named Anchor who had once been a candidate for Toyo Harada's Unity, joined Aric and the War-Monger. Because War-Monger needed to be near humanity to cause chaos, Anchor used his superhuman power to become immovable to pin her at the bottom of the ocean forever, sacrificing himself in the process.

Revenge of the Armor Hunters

Armor Hunters always complete their hunt, and they never leave a hunter behind. With Hunters Reebo and Helix believed deceased, Quartz captured, and GIN-GR rehabilitated, the threat of the Armor Hunters was believed to be over. The peace was disrupted Quartz's holding facility in Utah was attacked by rogue technology. Before Unity could respond from their base inside GIN-GR, the alien robot put herself on lockdown. While GIN-GR flew towards Quartz's prison, and the stone alien freed himself from his bonds, Eternal Warrior discovered that GIN-GR wasn't acting on her own will–she was possessed by fellow Armor Hunter Helix, who had escaped death. While X-O Manowar battled Quartz, and Eternal Warrior attempted to guard rehabilitated Hunter Malgam, Livewire purged Helix from GIN-GR's systems. GIN-GR destroyed Helix, and Quartz was returned to prison, ending the threat of the Hunters for good.

Unity was called into action once more when a powerful and ancient alien race known as The Torment appeared on Earth. They rampaged across New York killing and absorbing human life, and X-O Manowar and GIN-GR led Unity, G.A.T.E., and even the normally-antagonistic alien army known as The Vine went into battle against them. The titanic monsters were seemingly immune to damage, however, when they absorbed Aric, the Visigoth became exposed to their wide range of knowledge. When he was restored to the world, he revealed that Torment didn't want to kill: they wanted to die, but didn't want their vast knowledge to disappear. With their consciousness uploaded into his armor, they killed themselves, ending their massacre.

One of the team's last documented missions occurred when the villainous Project Rising Spirit unleashed a devastating Bloodshot Virus on New York City. The nanite-based virus transformed it's victims into insane, superhuman monsters, and Unity went into the city to attempt to stop the chaos. Multiple team members like Ninjak became infected with the virus, but they were cured by Bloodshot, whose own nanites could remove the virus from people's systems. While Bloodshot worked on finding a way to cure the city, Unity worked with his allies to stop the horde of infected victims from leaving the city. Livewire became infected as well, and with Bloodshot busy, Ninjak was forced to fight her. Eventually, Bloodshot returned, and he and Deathmate used their abilities to cure the city of the Virus.

The Unity team is currently defunct as many of its former members have gone rogue or missing in the past few months.

Note: All five were also members of the Harbinger Foundation's Eggbreakers.

Introduced as "travelers [who] call themselves Unity". First appearance in The Forgotten Queen #2 (March, 2019). 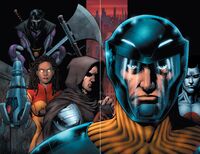 Retrieved from "https://valiant.fandom.com/wiki/Unity_(Valiant_Entertainment)?oldid=68104"
Community content is available under CC-BY-SA unless otherwise noted.