Vincent Van Goat is a simple farm goat that gained incredible superpowers due to genetic manipulation by the E.R.A.. She later became a pet to the superhero duo Quantum and Woody after they rescued her from E.R.A. facilities. For awhile, her brain contained the consciousness of Derek Henderson because of a scientific accident. Since his consciousness was flushed from her body, she is a normal goat again.

The curious creature-nicknamed "Vincent Van Goat" by Woody-has a history with their family that goes many years, back to the days when their father was a humble lab assistant to the bombastic Dr. Platzhalter. Platzhalter's work aimed to develop a device capable of backing up and restoring the full mind and thought patters of any chosen subject, a possible cure for Alzheimer's or the key to smarter A.I.. During an impromptu demonstration for representatives of Edison's Radical Acquisitions, an accidental lab accident resulted in the transfer of a copy of Henderson's mind into the goat. The E.R.A., unaware of what had truly transpired took the animal into their care and spent the next several years performing unethical scientific upgrades on the Goat. Overt time, these experiments entirely changed the Goat's physiology

Years later, as Quantum and Woody desperately tried to escape the E.R.A.'s secret island headquarters, the Goat--recognizing the "heroes" as "his" own wayward sons--came to the rescue, deploying a truly terrifying array of combat abilities to wreak havoc throughout E.R.A. compound. In the end, the Goat itself initiated the island's self destruct sequence, and was taken in by Quantum and Woody to live in Eric's Washington, D.C apartment.

Despite repeated and non-subtle attempts to let Quantum and Woody know that he is actually their father (kind of), it took the Goat a long time to convince its stubborn children that he was, in some form, their father. Eventually, after the pair has accepted their goat had powers and could poorly communicate with text-to-speech devices, it was discovered Vincent was actually a female goat. And, moreover, despite never mating, that the goat was pregnant. After a long and stressful pregnancy, Vincent gave birth, to Derek Henderson!

The best guesses of scientists suggested that this wasn't a true pregnancy, or even a real birth--instead, Derek's consciousness was flushed from the goat's body, into a new, energy-based form. This meant Vincent no longer had intelligence, or even superpowers, and was just a normal goat once more.

The grace and charm of a goat.

After "giving birth" to Derek Henderson, Vincent has lost all powers it once had. However, it formerly had a wide array of quantum-empowered abilities. 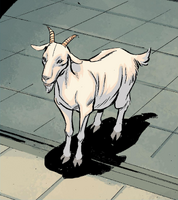 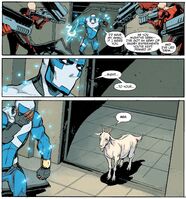 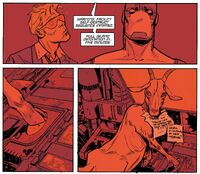 Retrieved from "https://valiant.fandom.com/wiki/Vincent_Van_Goat_(Valiant_Entertainment)?oldid=67303"
Community content is available under CC-BY-SA unless otherwise noted.