They ain't invented a weapon that can stop war, baby.

Vexana the War-Monger is an immortal agent of chaos and a long-time enemy of the many incarnations of Unity teams. While she is capable of turning others against each other with her words, she is incapable of killing someone with her own hands.

Vexana was born in the ancient city of Ur, as the youngest of 4 siblings. She was the only girl, as well as being much younger than her brothers. By the time she was a young girl, her brothers Ivar, Gilad and Aram were respected warriors. Because she was younger, and a little harsh and cruel for a child her age, her brothers didn't interact with her much. When the trio returned home from a quest to find a mysterious Boon as a duo instead of a trio, with Gilad on his deathbed, Vexana fled the city in tears. She discovered a place of power, the home of dark death cults dedicated to ending life. Being in such a place of power, and her heritage as an Anni-Padda, was all that saved her when the Boon was opened. A massive explosion occurred, a Great Cataclysm, that killed all life in Ur and the surrounding areas. Even Vexana died, but the dark spirits unleashed from the Boon sensed her heritage and woke her before she could pass on. This gave the young girl immortality, as well as the ability to control and manipulate emotions.

Vexana didn't know this, she simply thought she was to far from the blast to have been killed. When she returned home, she found everyone else dead, and being a child, began to blame herself. If she was the only one alive, could she have been the cause? So she fled Ur, walking the devastated land alone. Later, because of her guilt, she let herself forget Ur and her family, and convinced herself she was born around 1900 BCE, supposedly after a demon forced itself on her mother.

Calling herself the War-Monger, Vexana has claimed to have sparked almost every major world conflict in history, opposed only by different incarnations of Unity. Because she was seemingly unable to be killed, Unity would find ways to contain or isolate War-Monger, but she always returned. In the modern era, the current incarnation of Unity seemingly managed to permanently kill her, or at least keep her from harming anyone ever again. Because she feeds and feeds off of human conflict, the immovable psiot Anchor sacrificed himself to pin her at the bottom of the ocean, as far away from humanity as possible though she was later found and made her way back to the surface.

War-Monger has a sarcastic, irritable personality, prone to swearing and mocking her opponents. 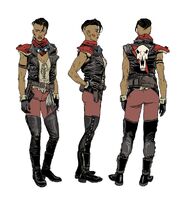 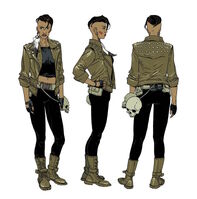 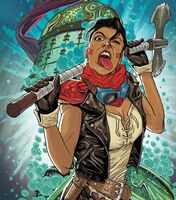 The Forgotten Queen #4
by Hannah Templer

War-Monger as a child

War-Monger in the Cold War 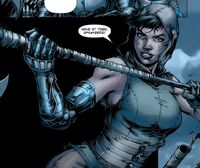 Entire world I knew wanted me dead. Story of my life.

They ain't invented a weapon that can stop war, baby.

Retrieved from "https://valiant.fandom.com/wiki/War-Monger_(Valiant_Entertainment)?oldid=69780"
Community content is available under CC-BY-SA unless otherwise noted.