X-O Manowar
The Worthy One
Aric of Urth
Aric, Son of the Revolution

Aric of Dacia (b. 375 AD), heir to the throne of the Visigoth people, has never known peace. A brutal encounter with a mysterious enemy known as "The Vine" leaves him a prisoner on an alien world, the only hope Aric has of returning to his family and saving them from slavery is to seize a weapon of incalculable destruction and become X-O Manowar.

In 402 AD, Aric of Dacia – the brash young heir to the Visigoth throne – led his fellow warriors into battle against the superior might of the Roman Empire. While the Visigoths fought valiantly, they were overwhelmed by the Romans and suffered a brutal defeat. Aric was further devastated when he discovered his father Rolf had been mortally wounded and his beloved wife Deidre, along with others, had been taken captive.

In hopes of freeing their loved ones, Aric and a group of Visigoth warriors attacked a strange transport they believed held their families. However, the transport turned out to be a shuttle operated by a merciless alien race known as "the Vine." Overcome by the advanced weaponry, Aric and his best friend Gafti were captured and taken to a Vine colony ship in deep space.

While attempting to escape, Aric and Gafti witnessed a Vine ceremony of worship for a suit of armor called "Shanhara." Before Aric and Gafti could learn more, they were recaptured by the brutal Commander Trill and sent to work as slaves in the Vine's deadly gardens.

Overcome with starvation, Gafti stole one of the alien fruits he was cultivating in the gardens. He was attacked by Vine guards, and when Aric rose to defend him, the guards severed Aric's hand as punishment for his insubordination. Years of subjugation ticked by, but Aric's quest to return to his loved ones never abated. Slowly, an escape plan was formed.

The day finally came. Aric rallied his enslaved comrades, and they turned on their Vine masters. The men suffered heavy casualties, but managed to make it to the ceremony chamber in which Shanhara was held. Aric approached the mysterious armor, not knowing that it had killed all who had tried to wear it before. He reached out his hand, and the armor flowed around him, seeming to accept him as its new host and granting him extraordinary powers and abilities, even healing his lost hand.

The Road to Rome

Using his newfound strength, Aric defeated Trill and escaped from the colony ship. Aric was finally free, and he willed the armor to fly him to Earth (Rome) where he would exact his revenge against the Roman Empire. There, on the sand of the Colosseum floor, he was confronted by scores of what he assumed to be Roman legionnaires. But what he did not realize is that he had somehow landed in present-day Italy, and the Roman Empire had been dead for centuries.

Despairing over a fight he could no longer win and a people he could not return to, Aric took to the sky and disappeared. He eventually learned that the Vine had been living on Earth for over a millennium, and had secretly infiltrated the highest levels of power, including the British Secret Intelligence Service.

While chatting to a young girl named Maria in Italy, Aric learned that the year was 2012 and that almost 1,600 years had elapsed since his enslavement by the Vine. After escaping Italian soldiers, Aric fled to the Amazon rain forest In an attempt to recapture the suit, the Vine dispatched a strike team into the Amazon rain forest. The team – accompanied by a Vine Planting named Alexander Dorian – confronted Aric, but was quickly destroyed by his hand. Only Alexander survived.

The Vine then realized that against the universe's most powerful weapon, only the world's foremost weapons specialist would stand a chance. MI6 Chief Patrick Clement contracted the lethal agent known as "Ninjak" to bring the armor back. Ninjak lived up to his reputation, taking Aric by surprise and rendering him unconscious with two spinning blades laced with tranquilizers.

Unbeknownst to Ninjak was once the armor was in Vine hands, the Vine would unleash a full-scale invasion of Earth to rid the planet of humanity. Knowing this, Alexander betrayed the Council by freeing Aric. Following a fight with Ninjak, Aric and Alexander managed to escape into Georgetown, the capital of Guyana. Alexander expressed to Aric his love for the indulgences of Earth, and had no desire to see them destroyed. While Aric was initially reluctant to help since the people that he had known had long died, Alex managed to convince Aric to help by pointing out that the Earth was in danger from the approaching Vine invasion fleet and that he was their last hope. Though Aric regarded Ninjak as an enemy, Alexander still wanted to reach out to the assassin, who was unaware that his masters were Vine plantings.

While Alexander explained how the Vines had inserted thousands of Vine plantings on Earth for generations, the two were attacked by Ninjak who had tracked them down. Following a brief skirmish, Ninjak held Alexander hostage with his sword. Alexander managed to convince Ninjak and Aric to reach a truce by raising the threat posed by the Vine invasion fleet. After tricking the Vine and their human plantings into believing that Aric had taken him and the Shanhara to Caracas, Aric traveled to London with Shanhara. Meanwhile, Alexander and Nanjik traveled to Guyana aboard the Vine planting Sadiq's jet and disposed of him on the way. With an invasion fleet on the way, Ninjak teamed up with Aric and Alexander, and the three of them took the fight to MI6's headquarters at Vauxhall Cross.

Aric attacked Vauxhall Cross to distract MI6 while Ninjak infiltrated the building and killed Clement and the agents inside. Eventually they found each other again and killed off the rest of the planting agents in British Intelligence. After escaping British military helicopters, Aric traveled with Alexander to Manhattan. Alexander was able to use his psychic connection to attend the next Vine meeting. However, the Vines had already discovered that Alexander was a traitor and cast him out. Another Vine planting agent tried to kill Alexander while he was immersed in the Gathering Plane but Aric saved their lives. Alexander then told Aric that the gathering was a set-up and that all he knew was that the Vine invasion fleet was on its way.

Aric is described as a bullheaded and headstrong individual with a lot of pride in his heritage as Visigoth. Despite his stubborn nature he is a compassionate man with a strong moral fiber, always striving to be an able protector and king to his wayward people. Initially melancholic about his years of slavery robbing him of a life he'd lost 1600 years prior to the story, he eventually cast's this off in wake of learning that his people had survived as slave labor even after all those centuries. 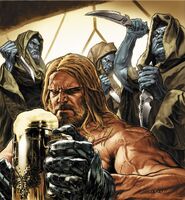 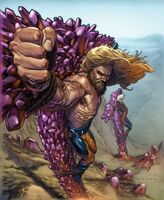 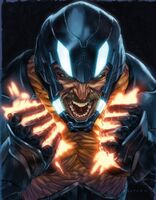 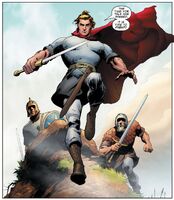 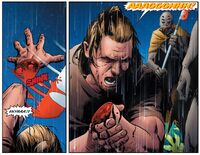 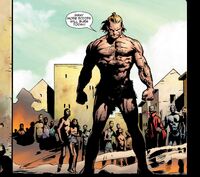 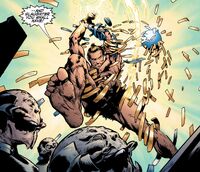 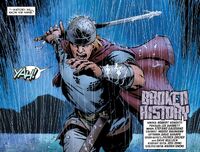 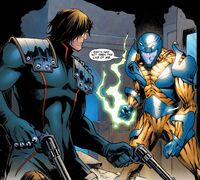 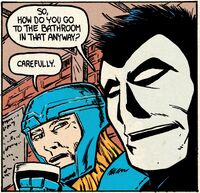 Brother, how long have we wandered the lands of this cursed empire? When our Roman masters have use for us, they send us to die in their wars. When they have no use for us, they slaughter us themselves. Meanwhile, our children starve. Our women are made slaves... or worse. No more. Today, with our families at our backs, we defend these fields as if they were our own. We raise our swords, and we tell the enemy: No more. For your fathers and mothers, fight. For your sons and daughters, fight. And, finally, for a land to call home -- FIGHT!

If you tire or your courage falters, remember all that these creatures have taken from us. Let your rage lift you up. If we surrender, we resign ourselves to be slaves forever. Tomorrow, we live or die as free men.

I do not command others to follow me. They follow because they choose to. Because I will not run. If there comes a day when I no longer have an army at my back, so be it. I will fight regardless. I will slaughter as many of the enemy as the lord will allow -- and I will die well.

Slaves! I am no different than any of you! Like you, I was taken from my own people. My own time! Subjugated by these vile conquerors who believe they have the right to do as they wish. No more. I stand before you, wearing the armor I won from them in battle, as proof they can be defeated. I have slain them until the ground was green with blood, but a river of blood waits to be spilt, and I cannot spill it alone. Join me. Tell the enemy you will be slaves no longer. Fight with me, and their empire will crumble. Fight with me. Together we will show them the rage of nations!

It is all right to be afraid of the future. To be afraid of the unknown. Those fears were once my own. But never again fear the creatures. Do not fear any who seek to bring harm to you. I will not allow it. You saw me slaughter the creatures and bring their entire world to its knees. There is no one -- not on any world -- who can defeat me. We will have a homeland -- and the power to keep it.

Dacia... my father spoke of your endless fields and cool rivers. What have the centuries done to you? I will make you whole again. The Visigoth who was chased from your borders by the Huns returns now a king. I have reclaimed this Earth through battle and blood. Those who try to take it will pay with the same.

Huns. Romans. *Ptoo*. Scourges, all of them. Yet countries still bear their names. Where is the country named for my people? We are forgotten. Ignored. Nothing more than a handful of baubles set on display. I can change all that. I will change it. Every man, woman, and child will soon know the word "Visigoth."

Retrieved from "https://valiant.fandom.com/wiki/X-O_Manowar_(Valiant_Entertainment)?oldid=68145"
Community content is available under CC-BY-SA unless otherwise noted.